The C&T Super386 being the last of the PGA 386-compatible CPUs ever released to be supported by the Universal Chip Analyzer, it was time to publish some benchmarks! The current integrated benchmark uses a lot of standard x86 operations (mov, add, conditional and unconditional jumps, …) and integer math instructions (add, sub, div, mult). Keep in mind that the UCA can achieve a 0-wait-states-everywhere communication with the CPU, nullifying any added latencies from chipset, RAM, or whatever. The results below are 100% linked to the raw CPU power without any limitation from the subsystem. 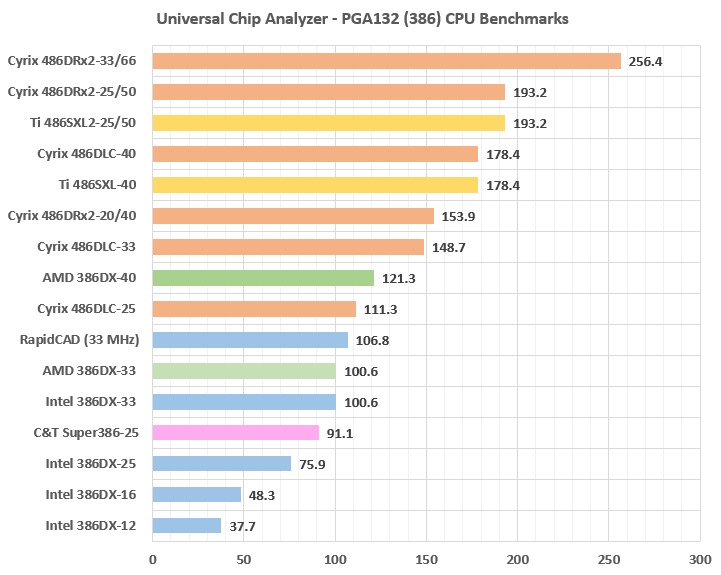 First, all 386 compatibles manufacturers which claimed superior performance versus Intel’s 386 actually delivered their promises. AMD’s 386s use the exact same die and consequently offers the same performance. Intel’s own RapidCAD is only 6% faster than the standard 386 on integer operation but comes with an integrated FPU offering much higher speed on floating point operations. The C&T Super386 is significantly faster than Intel’s 386: about 20% higher. C&T claimed its microprocessors were up to 10 percent more powerful than Intel’s, which looks almost correct in real-world applications where added latencies from buses and memory lower the raw gain.

Anyway, the much more advanced Cyrix 486 Core (and its licensed clone from Texas Instrument) takes the lead by a giant margin despite being pin-compatible with the 386 Socket. The slowest Cyrix 486DLC-25 is almost as fast as an Intel/AMD 386 clocked 40 MHz, and the clock-doubled 486DRx2 are twice faster than the fastest Intel 386!

One thought on “All PGA 386s benchmarked with the UCA”