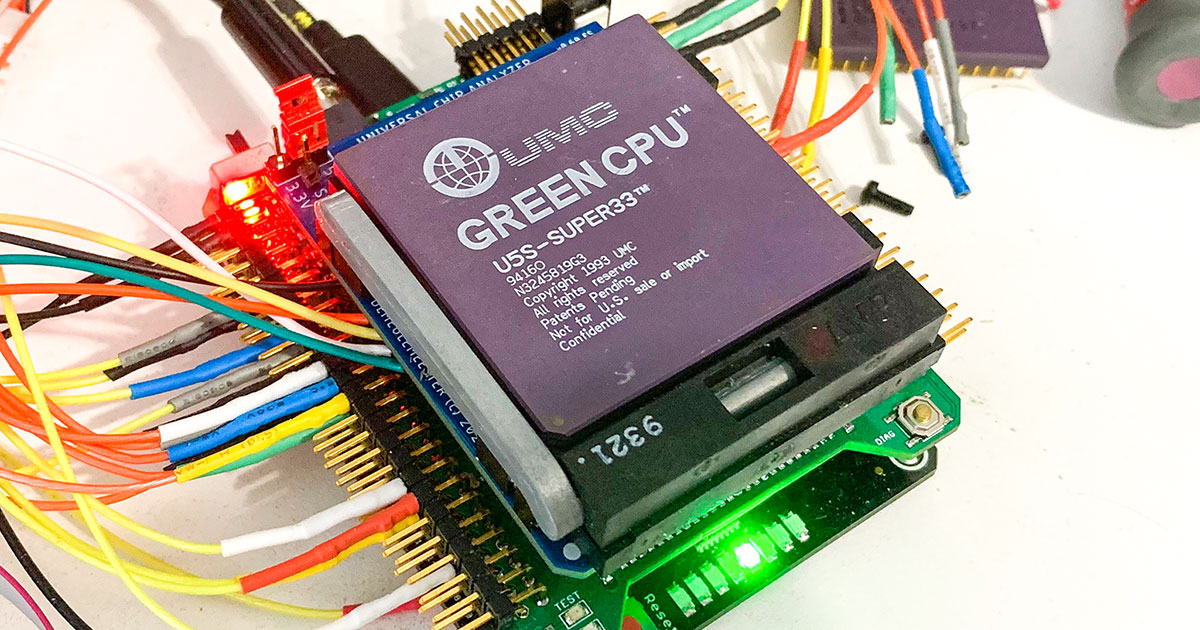 While sorting some new Engineering Samples I received lately, I exhumed some prototypes from my collection. They came without missing pins, so they are good candidates for an advanced investigation with the Universal Chip Analyzer.

Let’s begin with the first one, a UMC Green CPU U5S-SUPER33

It’s marked “Confidential” on the last line, which means it’s an engineering sample. The date code is quite early: 9416. It was manufactured on the third week of April 1994. This CPU is not one of the very first samples of the whole U5S line regardless of the frequency, but probably a prototype for the specific 33 MHz version. Also notice the famous “Not for U.S. sale or import” line, written here because UMC was afraid – and rightly so – of the legal consequences of infringing Intel’s ‘338 patent.

Let’s try it on the Universal Chip Analyzer: 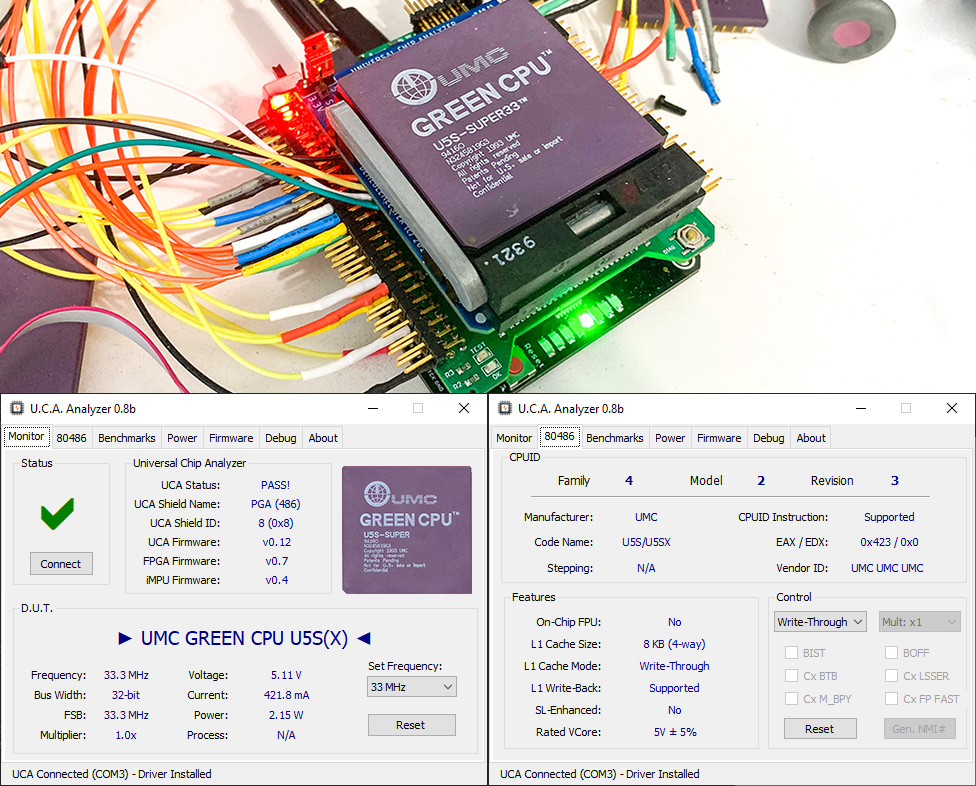 The prototype works fine up to 33 MHz. One of the first interesting points to check is the support of the CPUID instruction on such an early prototype. A few weeks ago, I was chatting with mtx500 (another well-known and very technical-aware CPU collector) about the way to detect UMC CPUs. He told me he uses the SALC/FS method to distinguish UMCs. The idea is to use the undocumented Intel opcode 0xD6 “SALC” (Set AL on Carry) instruction with the 0x64 “FS:” prefix. Only on a UMC, the combined 0xD6 0x64 opcodes return the “magic” constant 0x0AB6B1B07 in the EAX register.

However, on closer inspection, I found a noteworthy difference: power consumption. I ran the same INT benchmark on my 4 U5S with the voltage set at 5.11V exactly on all of them. The UCA is quite precise at measuring power consumption. All of them were tested at a fixed 33.3 MHz frequency, no matter their rated maximum speed.

The results are quite interesting. As you can see, all my retail U5S consume (almost) the same current: about 308 mA at 33 MHz while running my benchmark code. For an unknown reason, the U5SD is a bit higher at 321 mA, but the difference in power is only 50 mW. In the opposite, the prototype U5S-33 need MUCH more power to process the exact same code in the same time at the same frequency with the same voltage: 421 mA, which translate to about 2.15 watts.

The most obvious explanation is a switch in manufacturing process between the early prototype and the commercial revision. UMC was, at that time, one of the two major IC manufacturers in Taiwan, along with TSMC. We can consider they can switch easily between processes. On the very first U5S datasheet published in 1993, UMC indicates the U5S is built using a 0.6 µm CMOS process. This is consistent with the power consumption seen on the sample. I was able to find a table of the manufacturing process evolution in Taiwan in the 90s. 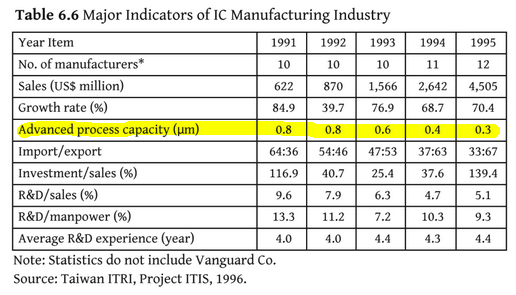 UMC and TSMC switched from 0.6 µm in 1993 to 0.4 µm in 1994. According to this table, it seems likely that the prototype is build using the ’93 process (0.6 µm) while UMC switched to the ’94 process (0.4 µm) for their retail mass-volume production. The retail U5S tested here need about 27% less power than the prototype. The theoretical reduction in power consumption between 0.6 µm and 0.4 µm is 33%, so that makes perfect sense. This Engineering sample is probably an early U5S manufactured with the original 1993 0.6 µm process. It is unknown at this point if retail (non-prototype) UMC Green CPU have ever been built with that process. Another analysis with a retail U5S produced earlier than August 1994 (Week 33’94) would allow us to be sure… 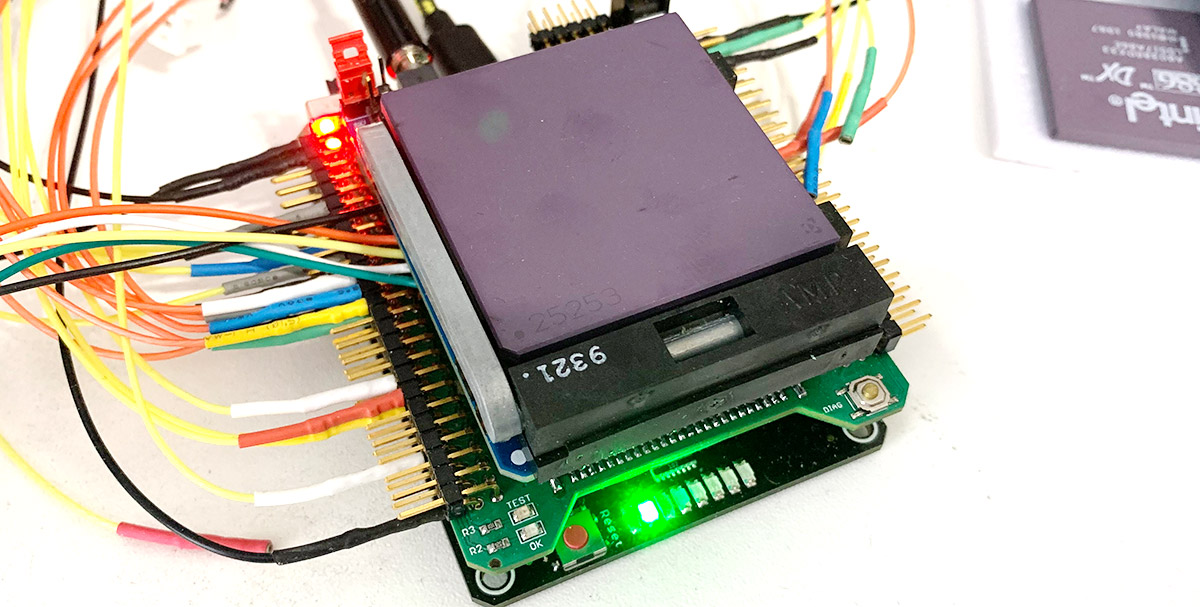 The Universal Chip Analyzer is useful to test and spot counterfeits CPUs, but also to help identify CPUs without markings. The lack of printings on a CPU can be caused by a poor ink quality that gradually faded out over years, by abrasion with other ICs (common when you saved a nice CPU from a “scrap lot”) or because it’s an early engineering sample (prototype). Here are two examples.

Let’s start with the first one.

It’s supposed to be an early engineering sample coming from ST Microelectronics. Hand-writing on top are “X2, Y4 #7”, probably related to the coordinates of this particular die on the wafer (X=2 , Y=4) and the wafer number (#7), and also “PLL”, which probably mean it was designed to test the integrated Phase-Lock Loop (clock multiplier). The back of the CPU shows that the PLL was configured for “3XCLK”. So it’s a DX4 class CPU. But it could also be a 5×86 ES. I have tested it on the UCA at 3.45V. 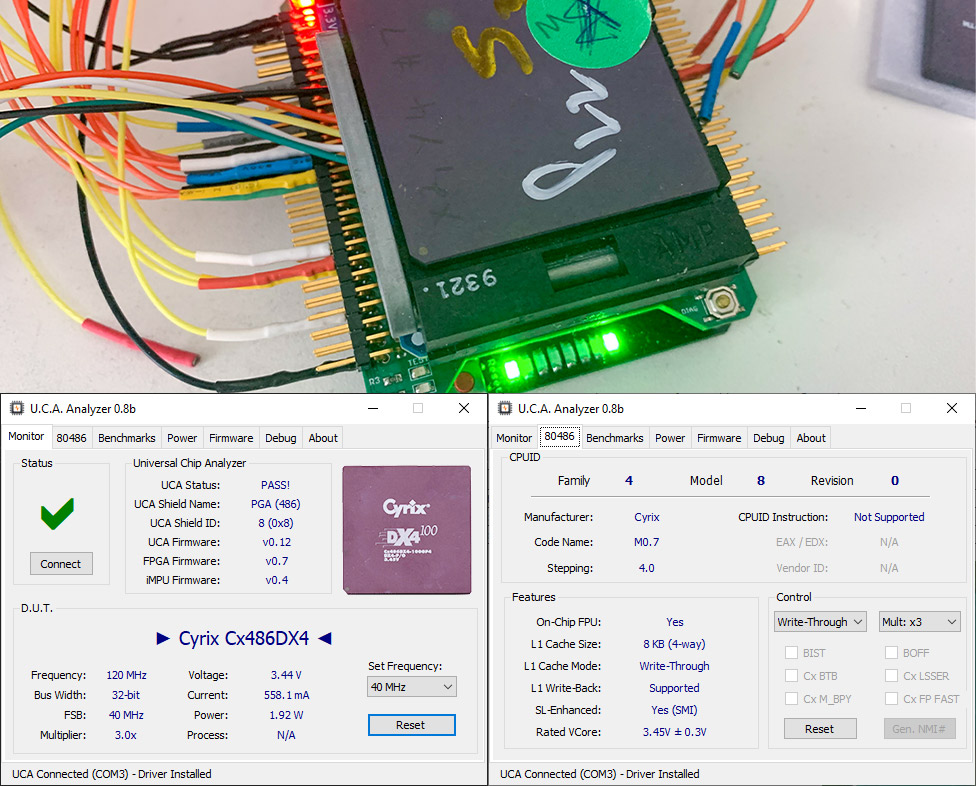 At this point, I have no proof that this sample comes from TI and not directly from Cyrix. Anyway, it could be an engineering sample for a hypothetical Cx486DX4-120, that was finally canceled to avoid hurting 5×86 sales. Interesting.

Here is the other one.

The package marking (25253) tell us it’s an early AMD 486s assembled by Kyocera, but there is nothing more written on top or back of the chip. Package number is almost often used for 3.3V parts (while 5V parts from the same era come on the 25220 package). Time to plug it on the UC! 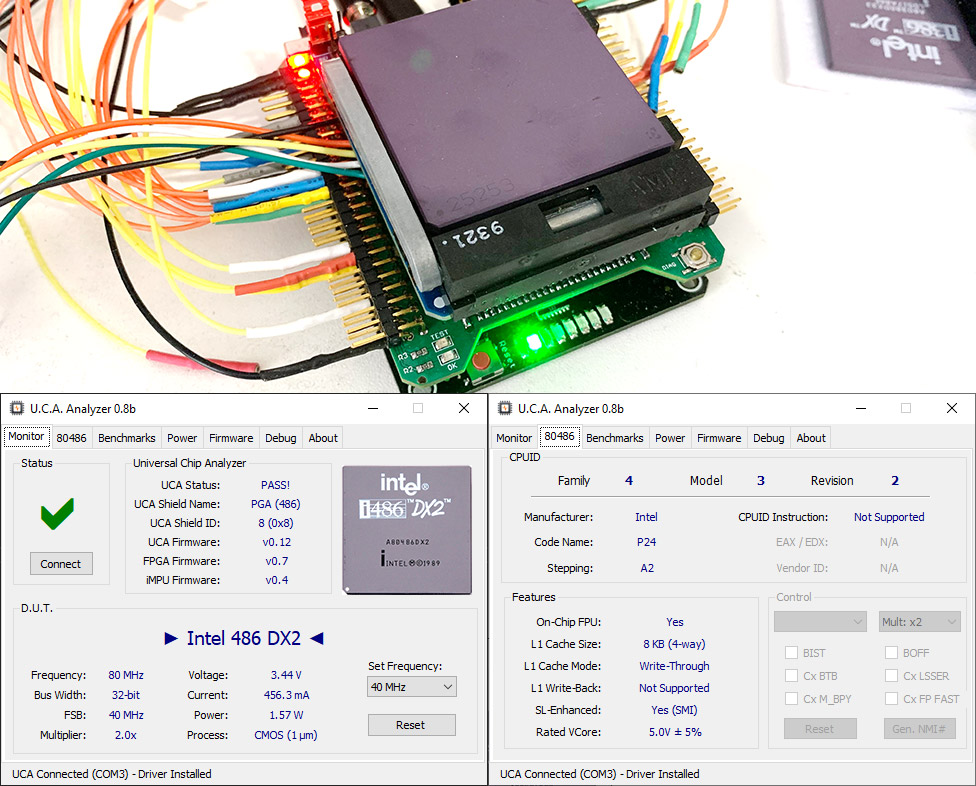 Early AMD 486s use the Intel 486 microcode, so they’re virtually indistinguishable by software. I’m testing a very nice way to distinguish them but that’s another story (I’m waiting for a new PCB and I’ll tell you more if it works as expected). The CPUID have 8 KB of L1 write-through cache and the CPU doesn’t support write-back, so it’s a (N)V8T revision and not a later SV8B. It doesn’t support 3x multiplier, so it’s a DX2 and not a DX4. Testing various frequencies shows it can work fine at 40 MHz. This unmarked CPU is probably an Am486DX2-80 NV8T, or maybe an Am486DX2-66 NV8T with a good overclocking capability. Nothings suggest it’s an engineering sample. Markings have probably faded over time (or have been removed due to mechanical action). 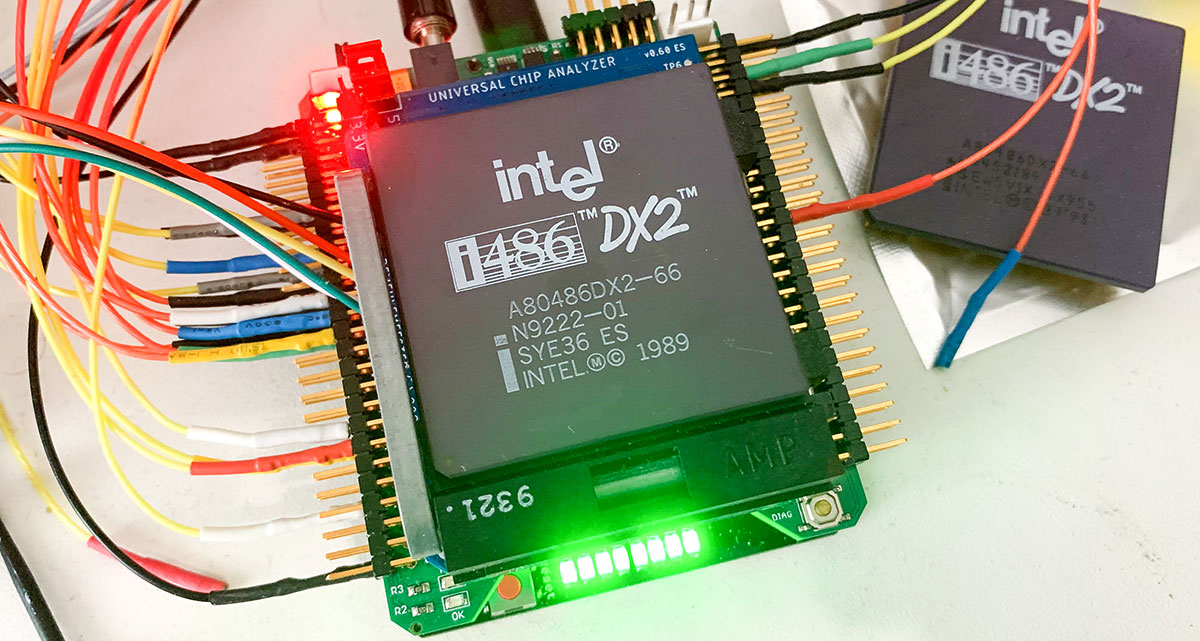 I’m starting a new section: IC Analysis! The goal is to study odd or rare CPUs with the Universal Chip Analyzer. As an avid CPU collector, I have many of them. Since I started collecting back in the early 00s, I have only been interested in Engineering Samples. These are basically prototypes of retail CPUs. Knowing their specification is often very interesting for historical purposes (ie: to retrace the timeline of the development).

This processor is uncommon in many respects, even for an engineering sample. It comes with the standard Intel i486 DX2 logo but other writings are printed instead of being laser-engraved. The part number on the first line (“A80486DX2-66”) is the retail one, while Intel often used the code number (“P24” or “A80P24”) on early prototypes of the 486DX2.

Another very rare feature of this CPU is the Intel’s product spec number used. From the 70s until today, Intel has used a 5-digit alphanumeric code (named “S-Spec”) to identify all their retail products. An S-Spec always starts with the letter “S” (ie: SX366 is a 80386 DX-33 and SR147 is a Core i7 4770K). The only exception is for prototypes (engineering or qualification samples), where the code begins with a “Q”. The presence of that “Q-Spec” (also named QDF) on a CPU is the most effective way to distinguish a pre-production sample from its standard production counterpart. On this obvious engineering sample (also marked “ES” on front), the QDF starts with S: “SYE36”. For a very short period (1991/1992), Intel produced some 386/486 Engineering samples with a spec code starting with “SXE”, “SYE” and “SZE”. The reason is still unknown, but this sample is one of them. 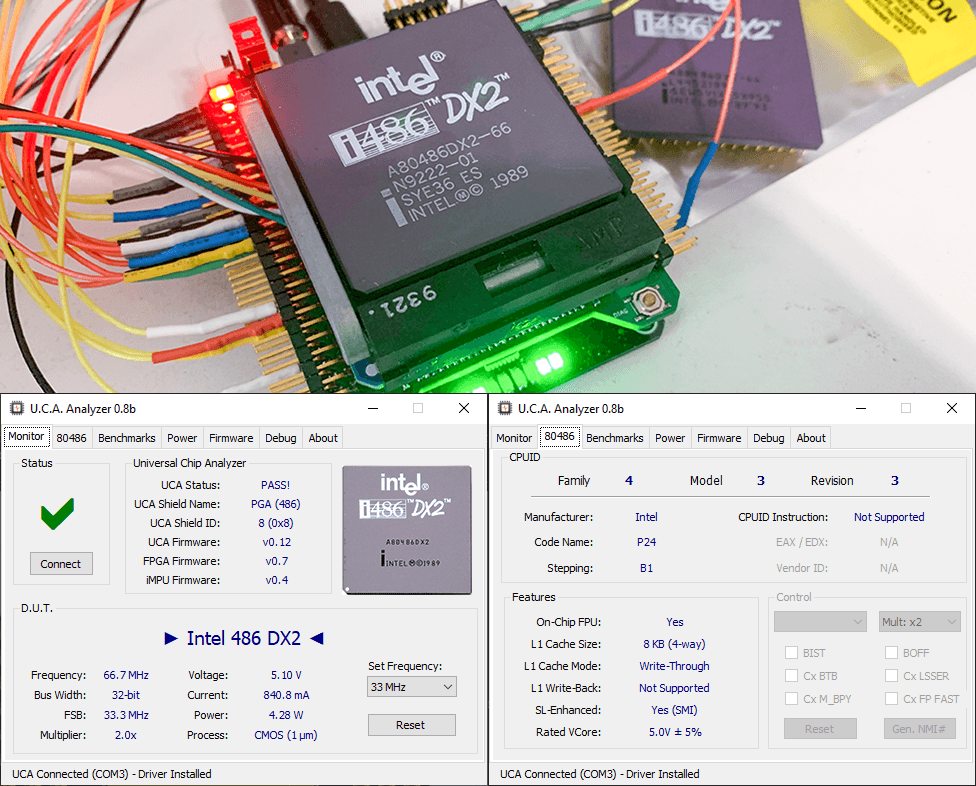 And It works fine! This early sample does not support the CPUID instruction, but the value at reset is 0x433. The first commercial stepping is A2 with a CPUID set at 0x432. Only a DX2-50 has been released with this stepping, which didn’t seem able to run properly at 66 MHz. This sample uses the B1 stepping, like the first retail 486 DX2-66 (SX645) released. Power consumption measured on FPU benchmark mode is quite high (4.3 W) but still within specs (4.5 W). Later DX2-66s need less energy.

Despite its unusual markings, it seems this sample was a qualification sample rather than a “true” engineering sample. It was probably sent to Intel’s customers for validation some weeks before the official launch. Other than that, it’s strictly identical to a SX645 486 DX2-66.