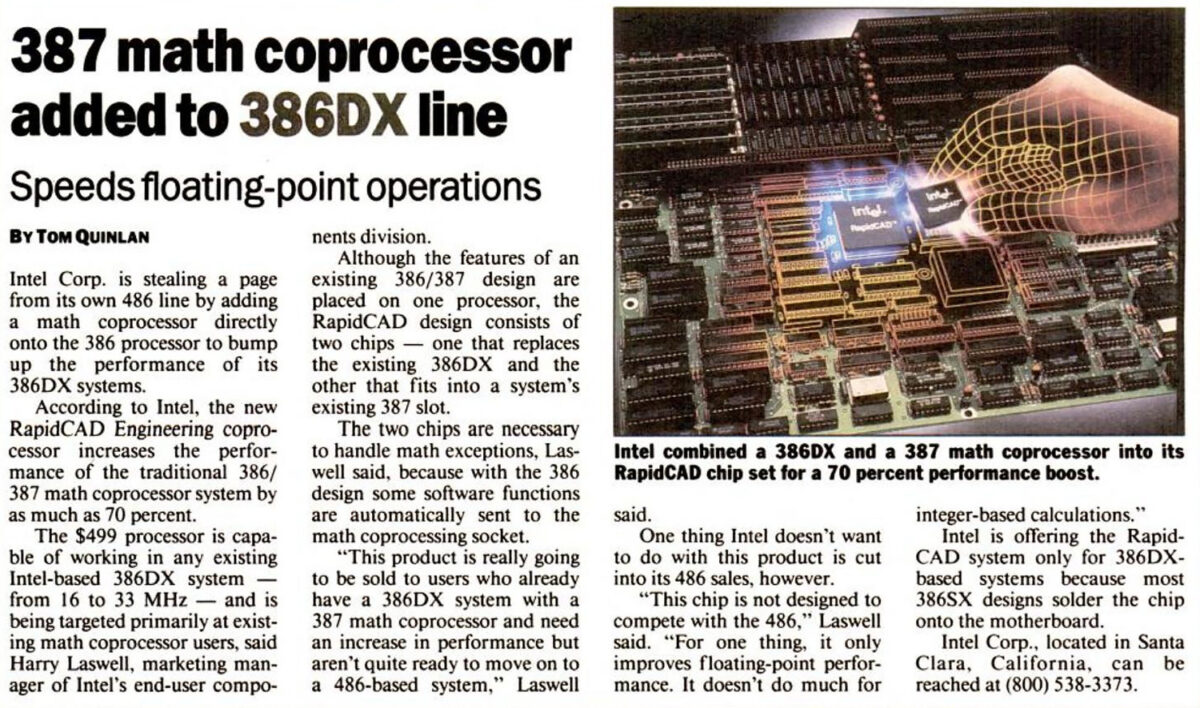 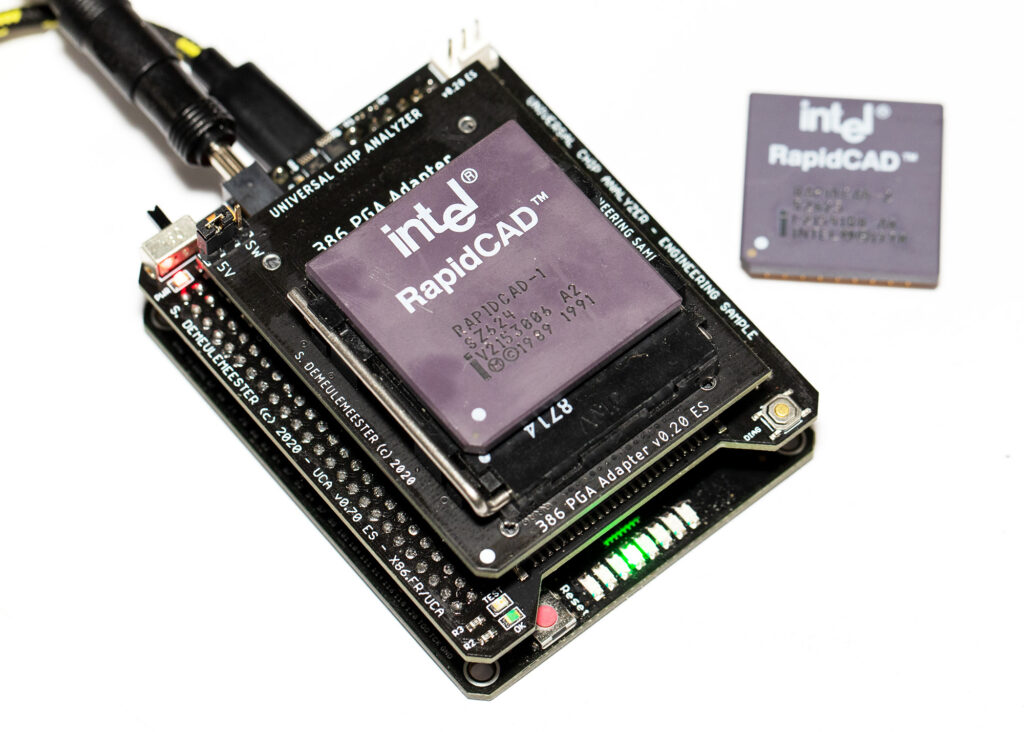 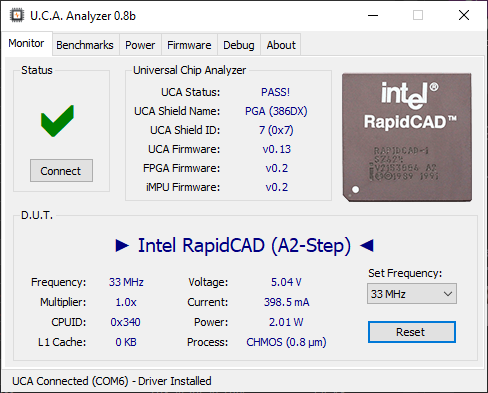 Counterfeits CPU were very common in the mid-90s. The worst period was between 1993 (just after the launch of the Intel 486 DX2) and 1998 (when the Pentium II started to be multiplier-locked). It was extremely easy for tricksters to remove the original marking and reprint another one with a higher frequency rating. Many DX4-75 were remarked to DX4-100, and even more Pentium 133/150 were remarked as Pentium 166 or 200s.

Genuine factory-remarked CPUs also exist, but they’re generally uncommon. The most well-known example is the double-sigma (ΣΣ) sign added on early 386s after they had been tested bug-free from the infamous 32-bit multiplier bug. Some rare Intel 486 SX were also later remarked with a higher speed grade. Here are two of them:

As for all factory-remarks, the addition is quite obvious. Intel probably binned twice these CPUs again at the request of a big customer (IBM?) and added the second rating later. Today’s story about factory-remarks is much more unusual because it concerns standard models.

After I published this analysis some weeks ago, a reader told me he had a strange Am486DX4-100 that seemed to be a AMD 5×86. After a careful look at the printings that looked 100% genuine at first sight, he was kind enough to lend it to me for further investigation with the UCA. Here it is: 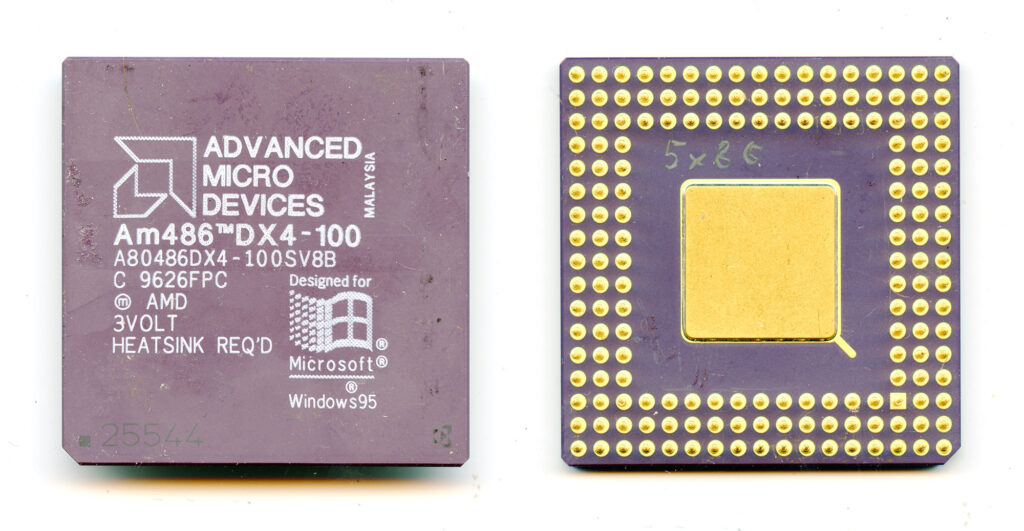 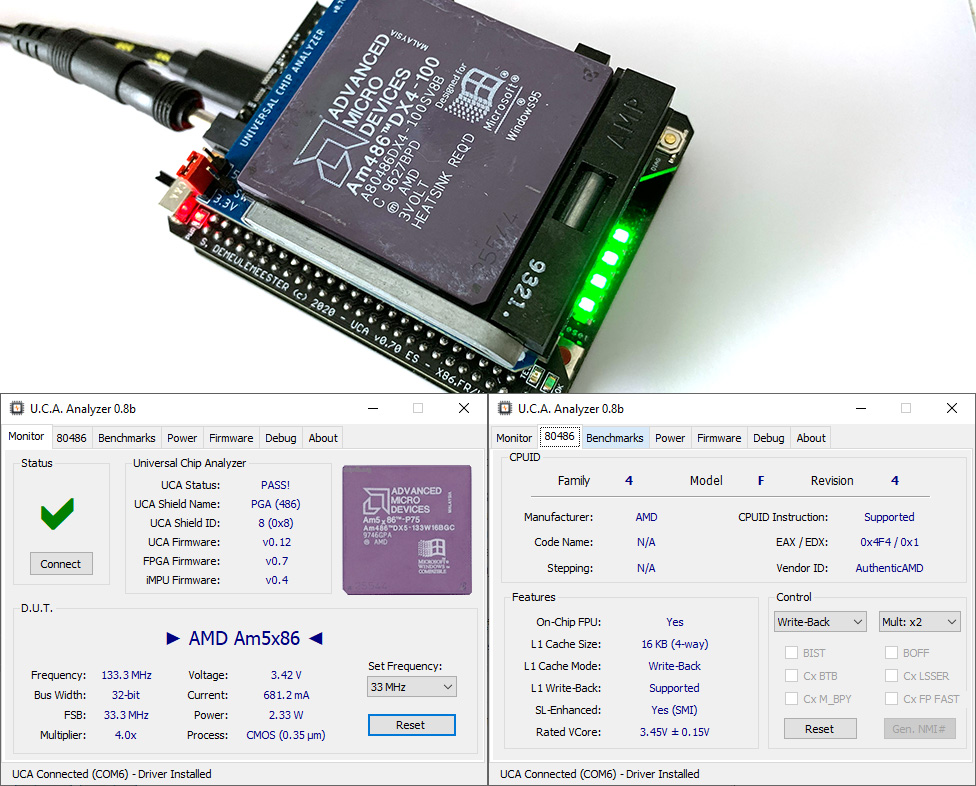 WOW! There is no doubt: this CPU is really based on the standard 350 nm die with a fully enabled 16 KB Write-Back L1 cache and a working 4x multiplier. Actually, it can even be overclocked easily to 133 MHz. All specs, including power consumption and CPUID (0x4F4), make it indistinguishable from an AMD 5×86. This CPU can of course also work with a 3x multiplier like an AMD 486DX4-100 (CPUID drops to 0x494).

After some research, it seems that all CPUs based on the 25544/C package are marked as 486DX4-100SV8B while being really DX5 SV16B (5×86). AMD produced them for quite some time between February 1996 and March 1997. They probably stopped the production of the old 500 nm die in early ’96 but still had some demand from customers for DX4s, so they just used the new 350 nm die and marked these CPUs as DX4-100s. As long as you use the default x3 multiplier, they behave exactly like the old one … except for the cache size.

Has Intel also done such weird things? I could have sworn no way. I was wrong…

The same reader also sends me a DX2-66 that could be “really a DX4-100”. That sounded odd and really unlikely to me because Intel has a strict policy on S-Spec. Intel DX4s also have a specific CPUID to help distinguish them from DX2s by software. Unlike AMD 486s, this CPUID does NOT change with the multiplier used, so it’s strange to have a DX2 with a DX4’s CPUID. Here is the original CPU: 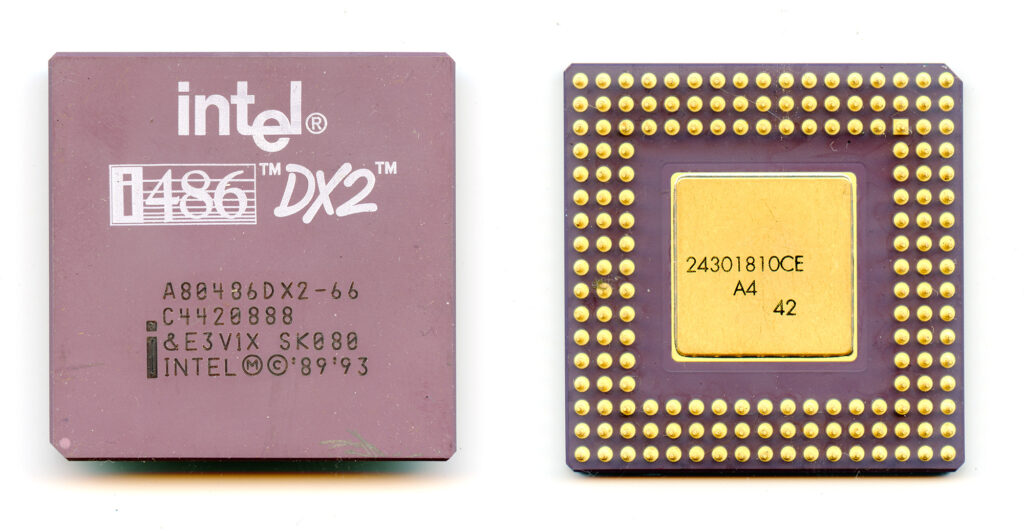 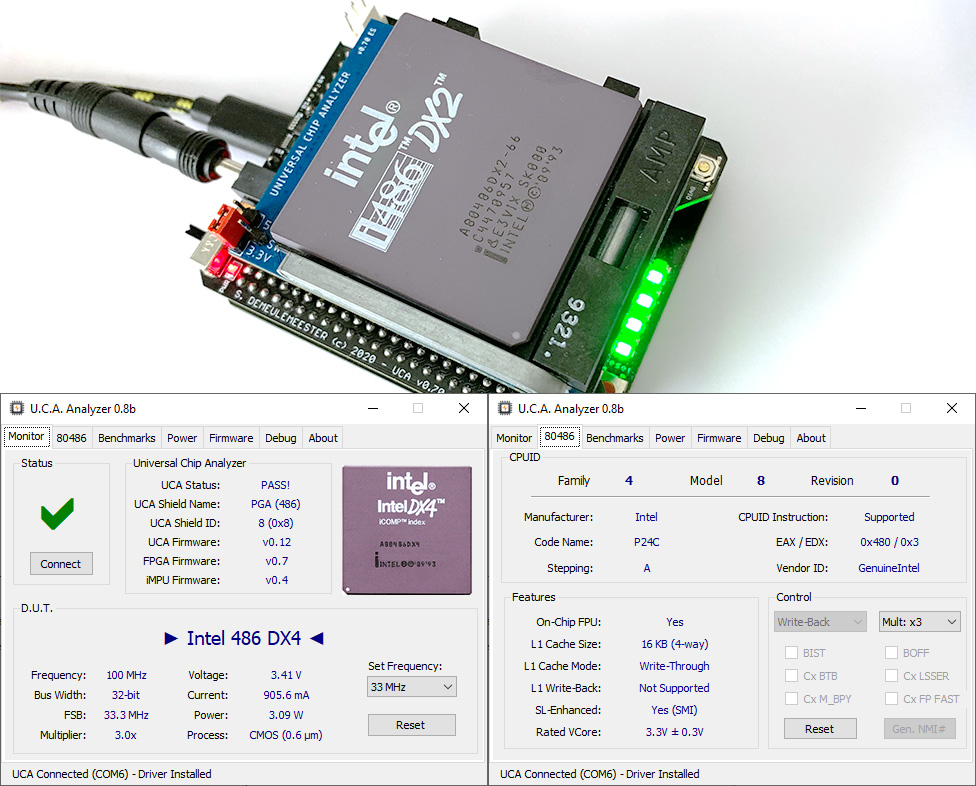 Awesome! This is really a DX4 factory-downgraded to DX2-66. The 0x480 CPUID leaves no doubt about the original die used here. The usual power consumption and the ability to work fine at 3.3V at 100 MHz let me think it’s probably a DX4-100. With the multiplier set at 2x, the SK080 also works at 2×33 MHz as expected for a CPU marked as a DX2-66. To be 100% sure, I was able to find another sample to confirm these findings. 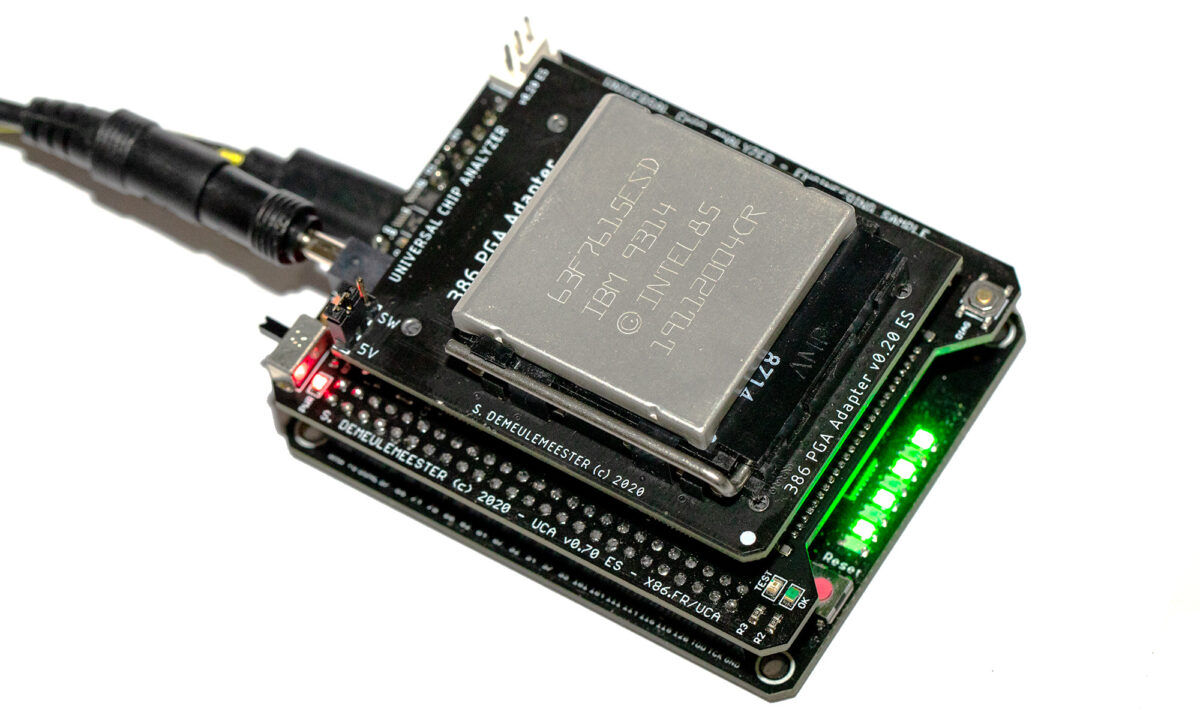 As like all previous microprocessors, Intel licensed the i386 design to third parties. AMD was the only one legally allowed to sell Intel-based 386s to customers (as bare CPUs), but IBM was granted the right to produce some Intel 386s for its own use. They don’t look like a standard ceramic CPUs : IBM used a plastic substrate and a metal cover to protect the die and help with thermal dissipation. Here is how they look like. 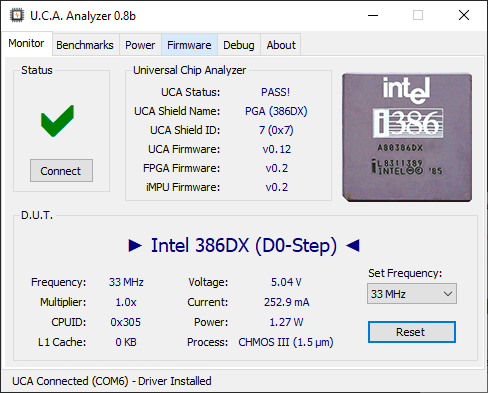 AMD also produced a lot of Am386DX at 20, 25, 33 and 40 MHz. While the microcode is 100% from Intel, the manufacturing process is different and they had lower power consumption (thanks to the 0.8µm process used by AMD instead of Intel’s 1µm CMOS-IV on the latest i386s). 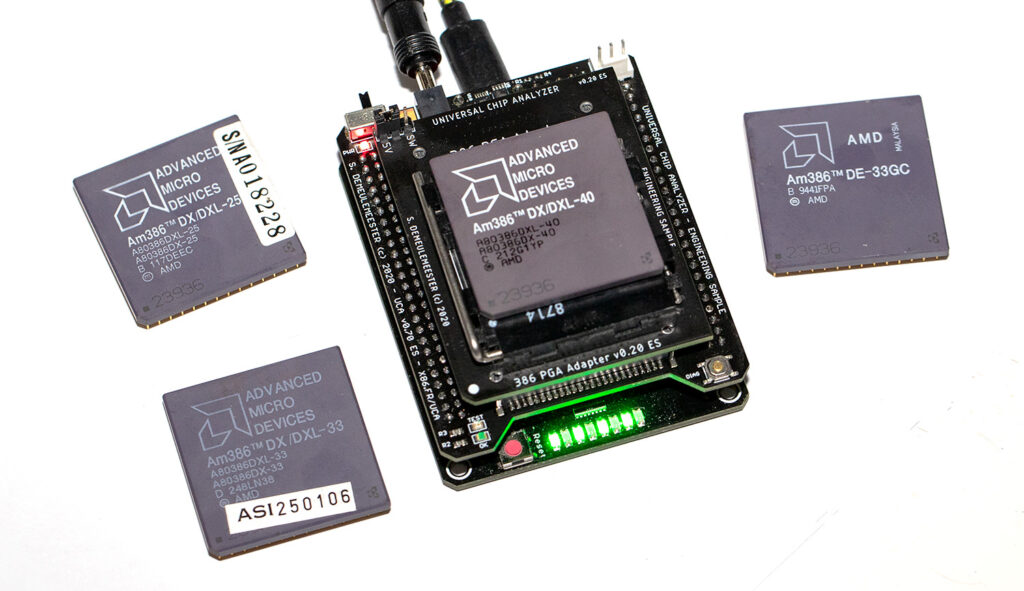 The last CPU to try was the Am386DE-33, an uncommon embedded model. Like the Am386DXL, it uses a fully-static design, meaning it can be clocked down to DC (0 Hz) while retaining all its internal registers content. The biggest difference between the usual Am386DX/DXL and the Am386DE is the disabled Paging Unit in protected mode on the latter. Bit 31 of CR0 (used to enable paging) is reserved on Am386DE. Another difference only available on the Am386DE is the ability to work at its rated frequency with a much lower voltage (down to 3.0V). And it works fine: 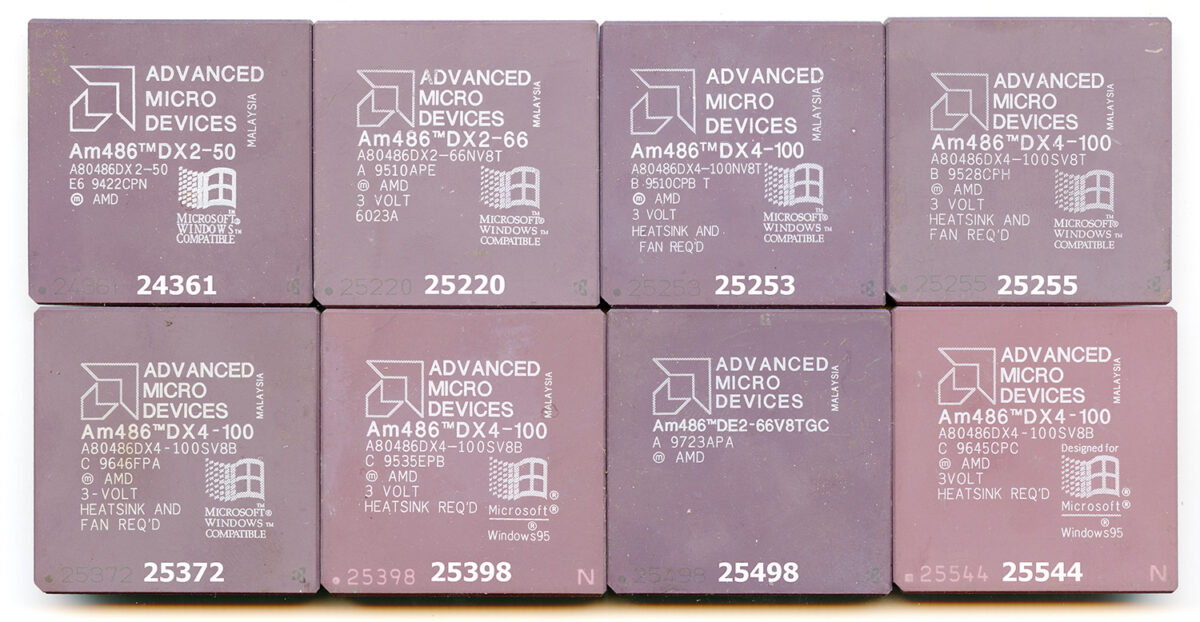 After weeks spent to test A LOT of AMD 486 with the Universal Chip Analyzer, messing with a gas torch  to decap some of them and speaking with a former AMD engineer that worked on them back in the 90s, I’m happy to publish here all the information I was able to get! Here it is:

PS: If you have any more information about AMD 486, please leave a comment. Thanks! 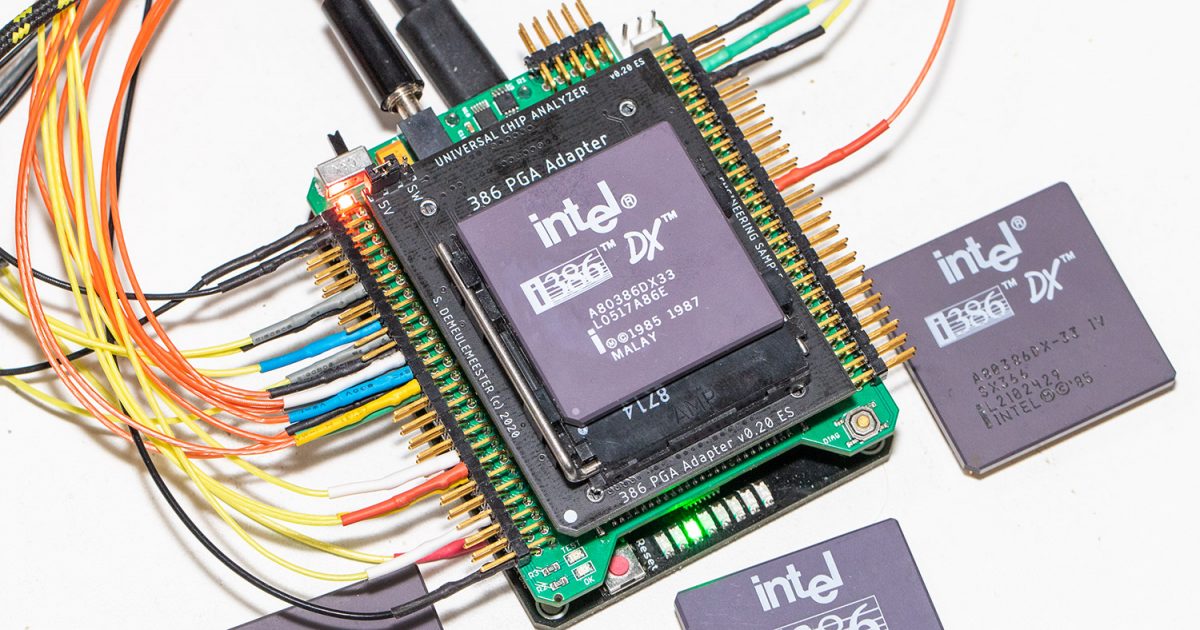 Another milestone has been reached. A new iconic CPU family is now supported by the UCA: the Intel 80386, the very first 32-bit x86 microprocessor! The i386 was originally released in 1985 at 12.5 MHz and 16 MHz. It added a 3-stage instruction pipeline and an on-chip MMU (Memory Management Unit) able to address up to 4 GB of RAM. A giant capacity for that time. The original Intel 386 – then renamed 386DX – comes in a PGA132 package and its frequency was later upgraded to 20 MHz, 25 MHz and finally 33 MHz. Later clones from AMD & Cyrix – not yet supported by the UCA – were also released at frequencies up to 40 MHz.

The design of the UCA 386 Adapter was challenging because of the high frequencies involved. While all 486s work with a standard clock input, 386s require a clock-doubled signal with a strong voltage swing (CMOS) between 0 and +5V. Generating frequencies up to 80 MHz (for a 386DX-40) with these requirement was not possible with the UCA architecture, so the UCA 386 Adapter includes an external clock-doubling PLL. For the first try, I used a NB3N511 clock multiplier from On Semiconductor but I was unable to reliably run 386s at more than 20 MHz. The UCA is based on a FPGA and timings are crucial.  With the NB3N511, I was unable to successfully match timings because of the lack of phase synchronization between the input clock generated by the FPGA and the doubled frequency fed to the CPU. So I needed another PLL, with 0-delay between input and output. 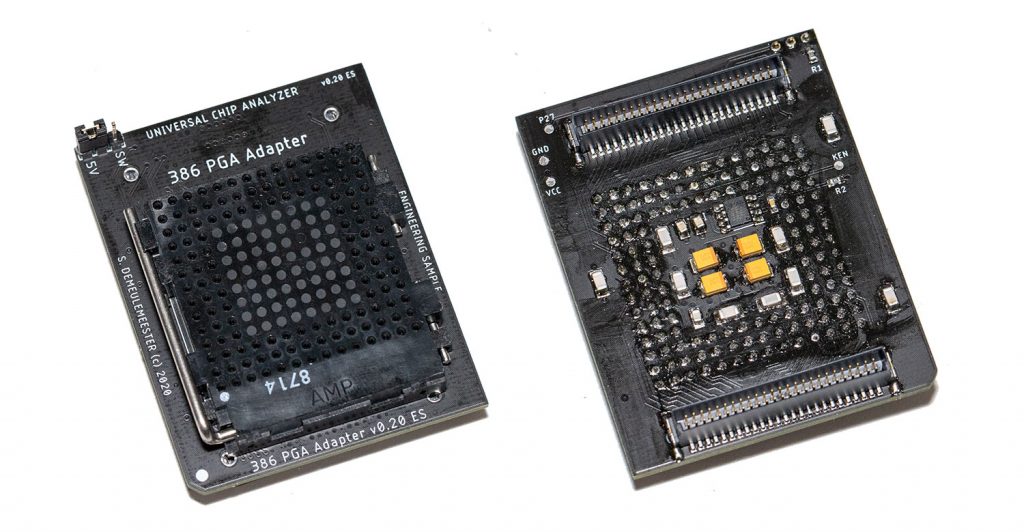 After some research, I gave the ICS570A a try and it worked perfectly fine. I was able to sync the internal FPGA logic to the clock-doubled CPU signal up to 40/80 MHz, without having direct access to that signal. Some high-quality ceramic decoupling caps were also mandatory to achieve the highest frequencies. I had a bad surprise while looking at ZIF socket for the 386 Adapter: for some reasons, PGA132 ZIF Socket are extremely expensive and I was unable to source them at a decent price. I bought some at ~$25 each, but if you can help me find more at a lower price, please drop me an email! 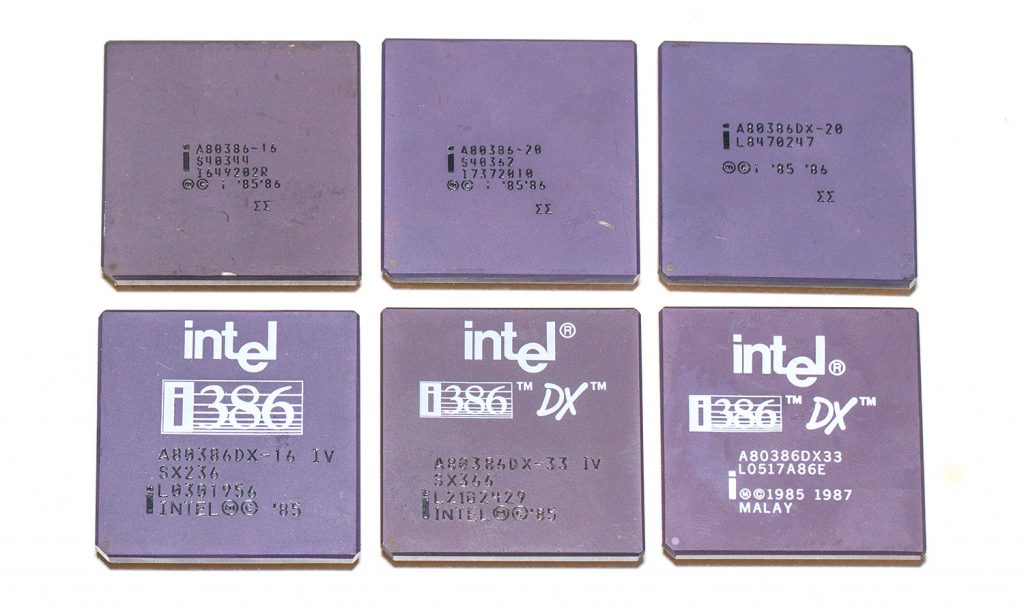 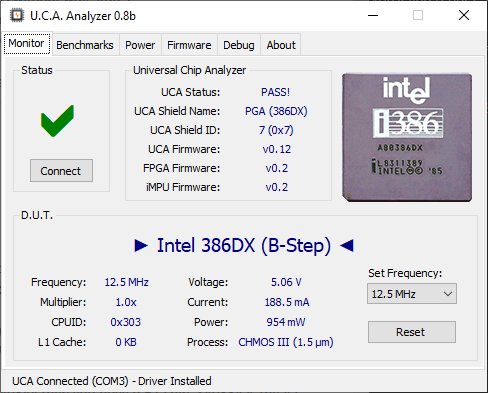 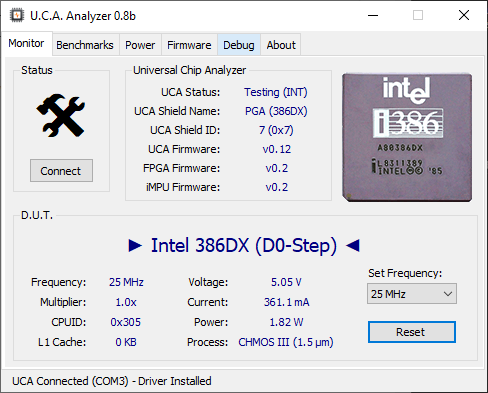 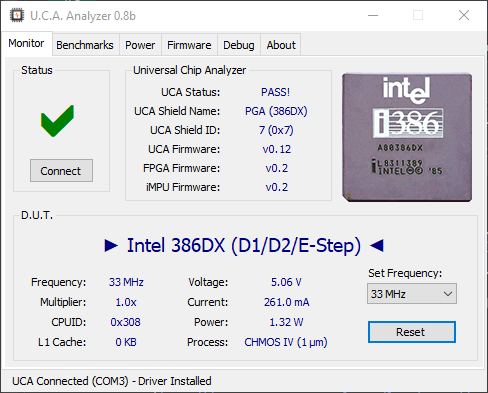 Stay tuned for more exciting news about the UCA!