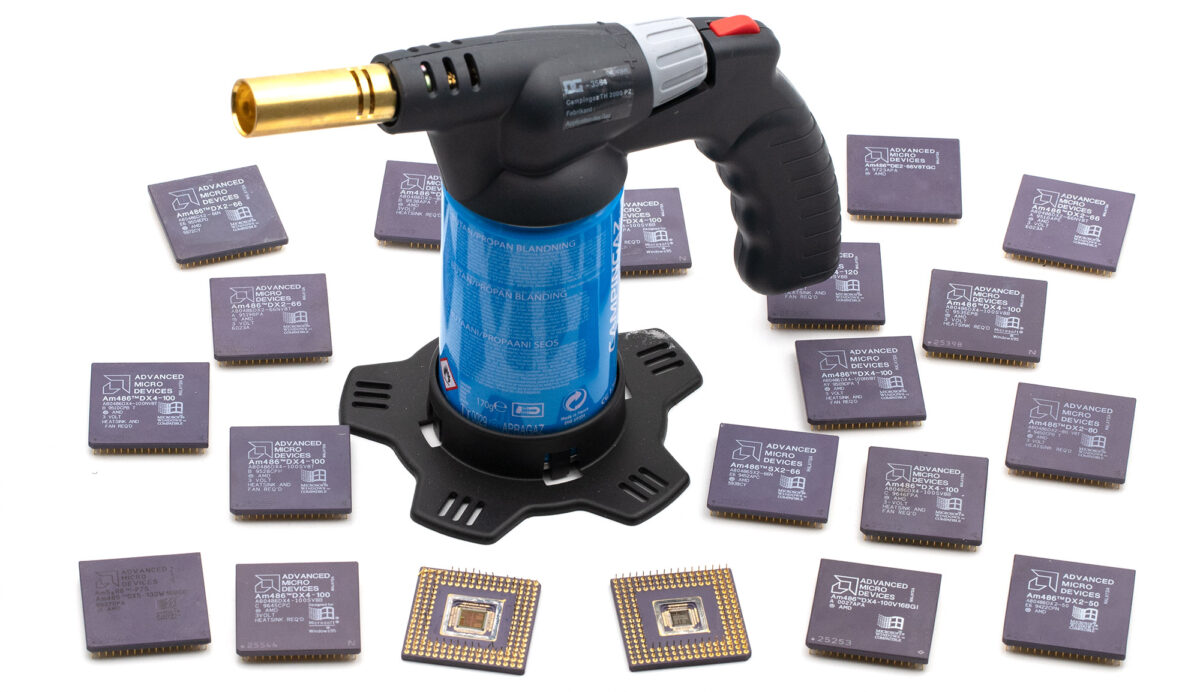 Working with the Universal Chip Analyzer has so far been a fantastic way to explore many aspects of the silicon industry from the 70s to the 90s, with a countless amount of details that remain to be learned. Lately, a reader told me about some strange 486s he had and was glad enough to lend them to me for a detailed investigation with the UCA. I can’t wait to tell you more about these, but I took some time first to write a complete guide to AMD 486 dies and packaging. I bought a LOT of Am486s and decap’d many of them to get some information. I also had the chance to talk with a former AMD engineer that worked on the Am486 product line back in the 90s.

A microprocessor is made up of a die (the small piece of silicon where the transistors are etched) assembled inside a package. Until the mid-90s, CPU manufacturers mainly used ceramic packages. This material is very hard, durable, and electrically non-conductive while able to dissipate heat fairly well.

The ceramic substrates used on Intel 486 processors were not made internally but bought from third parties, especially these four Japanese companies:

AMD ordered the substrates for their Am486 from the same companies, except for the last one. It’s very difficult to distinguish an Intel package manufactured by Kyocera from another one made by NTK or Sumitomo. Fortunately, that task is far easier with AMD’s 486 because of the logo printed – or laser engraved – on the bottom-right of the package. 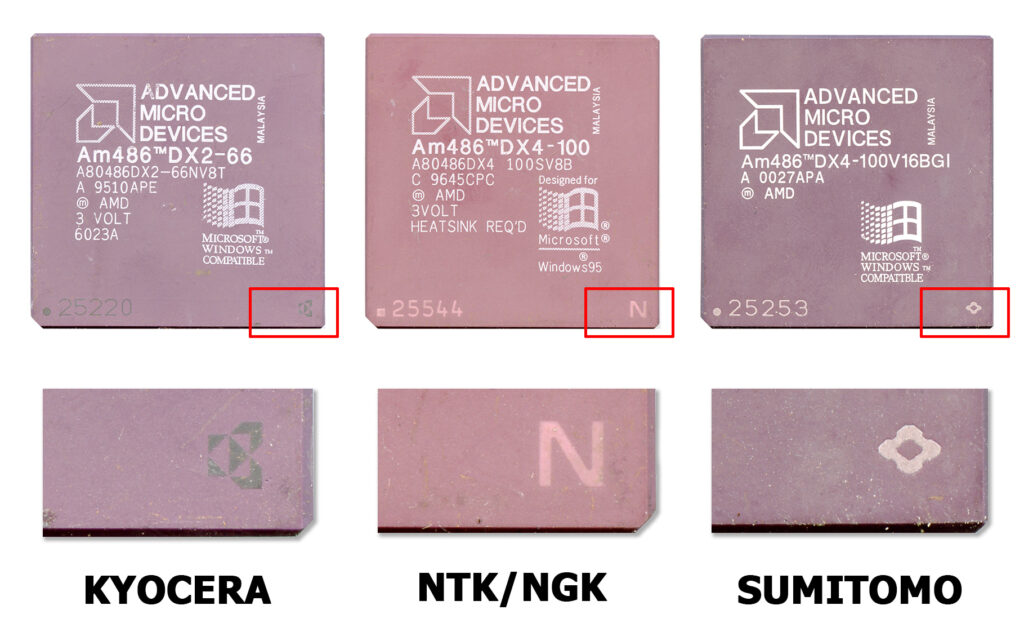 In the second half of the 90s, beginning with late Pentiums (P54CS), Intel gradually switched from ceramic to plastic packages for their processors. The previous “big three” companies (Kyocera, NTK and Sumitomo) from the ceramic era were progressively discarded while Shinko gained recognition, along with the US-based Johnson Matthey Electronics (a company established in 1817!). But the most technically advanced manufacturer of plastic substrates for semiconductors – named Ibiden Co., Ltd – remained in Japan (Ogaki). AMD only transitioned from ceramic to plastic long after Intel, with the Athlon XP launched in 2001. All previous CPUs (486, K5, K6-1/2/3, Athlon, Duron) were still based on good ol’ ceramic substrates!

But let’s go back to our Am486. There are basically 2 major physical packages and 8 minor revisions. We’ll talk later about the minor versions, which can be recognized by their package code. The two major versions are distinguished mainly by the dimensions of the internal cavity, designed to accommodate the physical dimensions of a specific die. It’s easy to distinguish the two major versions by the size of the metallic plate that covers the die on the back of the CPU.

The size of the left one is 20 x 20 mm. The internal cavity can accommodate a larger die than the right one, which has a smaller cavity and a covering plate measuring only 18 x 18 mm. If you see the bigger plate on back, your Am486 is an early one with a bigger die. But if the plate is the smaller one, your CPU is probably a later one with a smaller die. Why are some dies small and others big? What’s the difference between them? Let’s dig deeper!

Am486 dies were produced on 6-inch (150 mm) wafers. Depending on the manufacturing process, a single wafer can contain up to 200 dies. The more advanced the process, the smaller the transistors, and the more you can put on a single wafer at the same cost. Which means more profit.

Today, AMD doesn’t have semiconductor plants anymore, their latest CPUs are manufactured by third parties (Samsung, TSMC, etc.) using processes far more advanced than what Intel is able to do. Since 2015, Intel has lost its technical advance for the first time in 40+ years and since then, Chipzilla has been unable to do better than 14 nm in big quantities, while the latest AMD Ryzen are based on a 7 nm process. Two steps ahead!

Back in the 90s, Intel was the unrivaled leader in manufacturing processes. When AMD announced the first Am486 DX on March 1993, it was made on a 700 nm process (each transistor was 100x bigger than the ones on the latest Ryzen!). At the same time, Intel had already produced CPUs with a similar process for 4 years and was readying 500 nm CPUs. During all of the 90s and 00s, the Behemoth from Santa Clara was always at least one process ahead of all its competitors.

Back to the Am486, AMD has manufactured four different major dies over the life of the product, each of them with numerous minor variations (steppings). For a better understanding, I put them (approximately) to scale:

As of the Am386 and up to the Athlon 64s, all AMD processors have a 5-digit number written on their package for identification. This package code is closely related to the manufacturing process used. 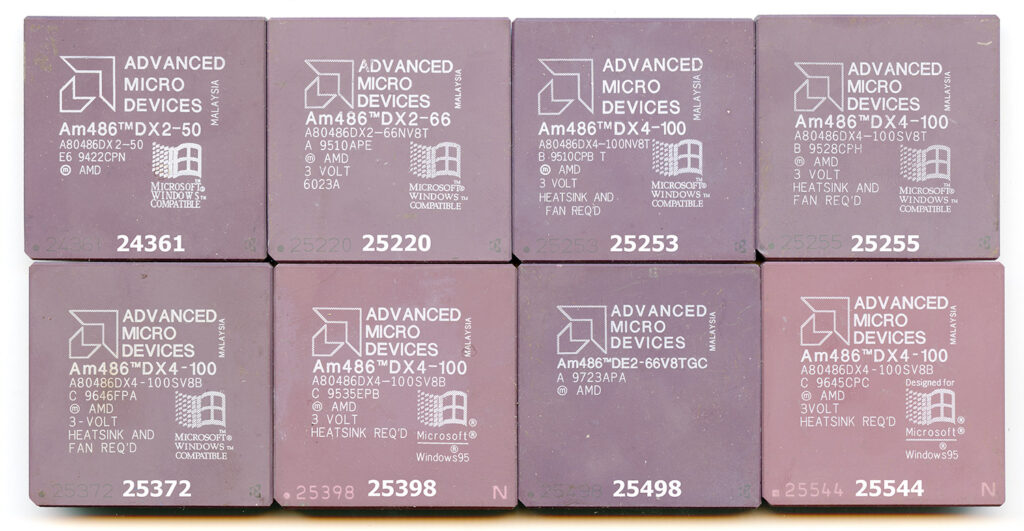 In order to grab as much information as possible about Am486 processes, I had to build a special firmware for the Universal Chip Analyzer. The goal was to be able to check the power consumption of all revisions (about 20 different ones!) at the exact SAME frequency and SAME voltage. That’s the only way to measure changes between two dies. Unfortunately, some Am486 requires 5V while later ones need 3.3V. Even worst, the same multiplier is not available on all parts. 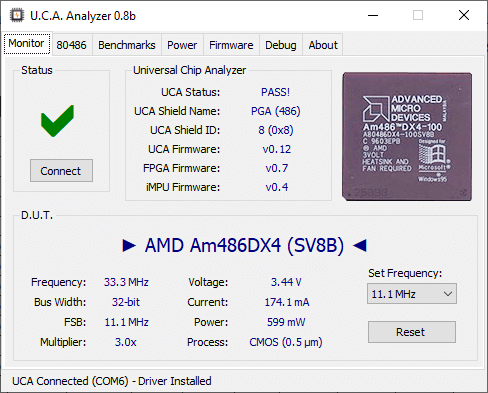 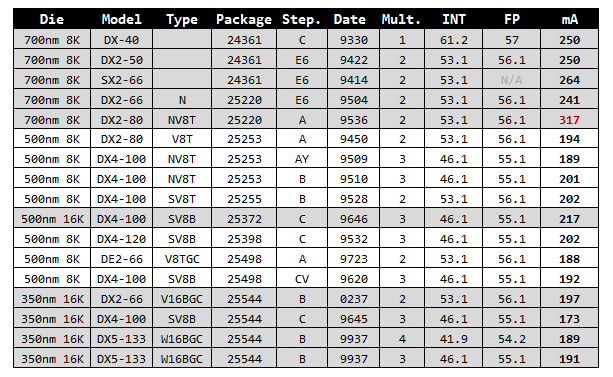 For each CPU tested, I checked the benchmark results to be sure everything was correct. I noticed that, while the FPU benchmarks remained almost the same no matter the multiplier, the INT benchmark slowed down a bit at each multiplier increase. This is probably due to the growing gap between the external front-side bus frequency and the internal ALU frequency, that led to an FSB bottleneck for simple (1- or 2-byte op) INT instructions. In real-world use, the clock-to-clock penalty was largely compensated by the much higher final frequency reached. Here is an easier to read chart: 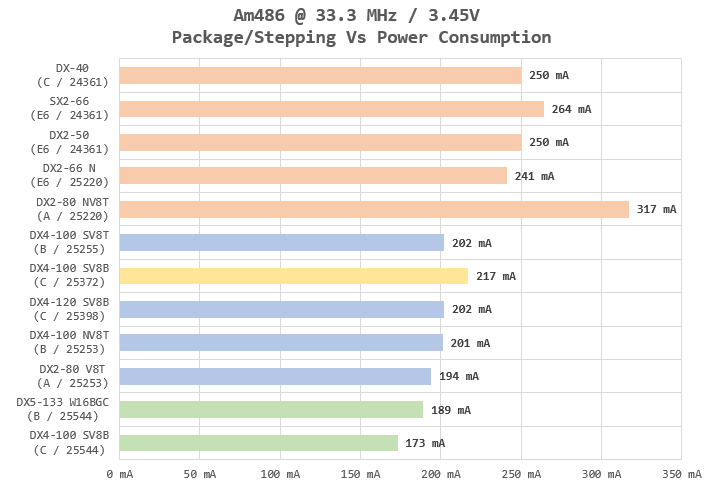 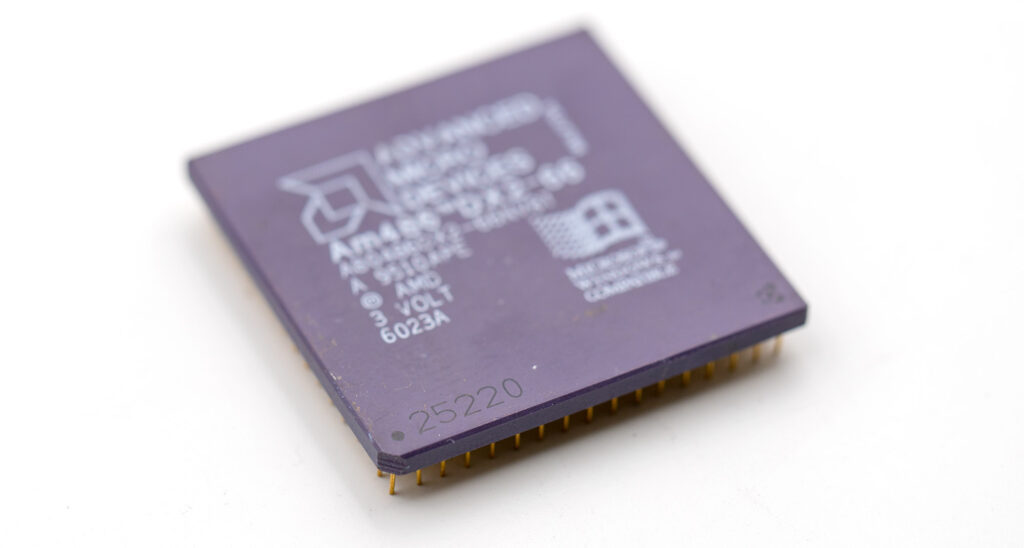 When I started writing this, I had several questions about the dies present in different package. Power analysis answered a lot of them, and when doubts remained (ie: Is the 25372/C really based a stripped-down 500nm/16KB die?) I had to remove the protective cap covering the die to be 100% sure (ie: yes!). But one mystery remains…

I can only make an educated guess at this time. Maybe AMD tested the RTL design planned for the 2nd gen 500nm die on the earlier 700nm process. That could have been useful to avoid shortages in case of later issues with the yield or production capacities on the 500 nm node. As soon as the 500 nm was up and running successfully (mid to late ’95), they were able to drop the old 700nm mask used on 25220/A. A die shot of the two die could help solve that mystery. I’ll post an update an soon as I know more…