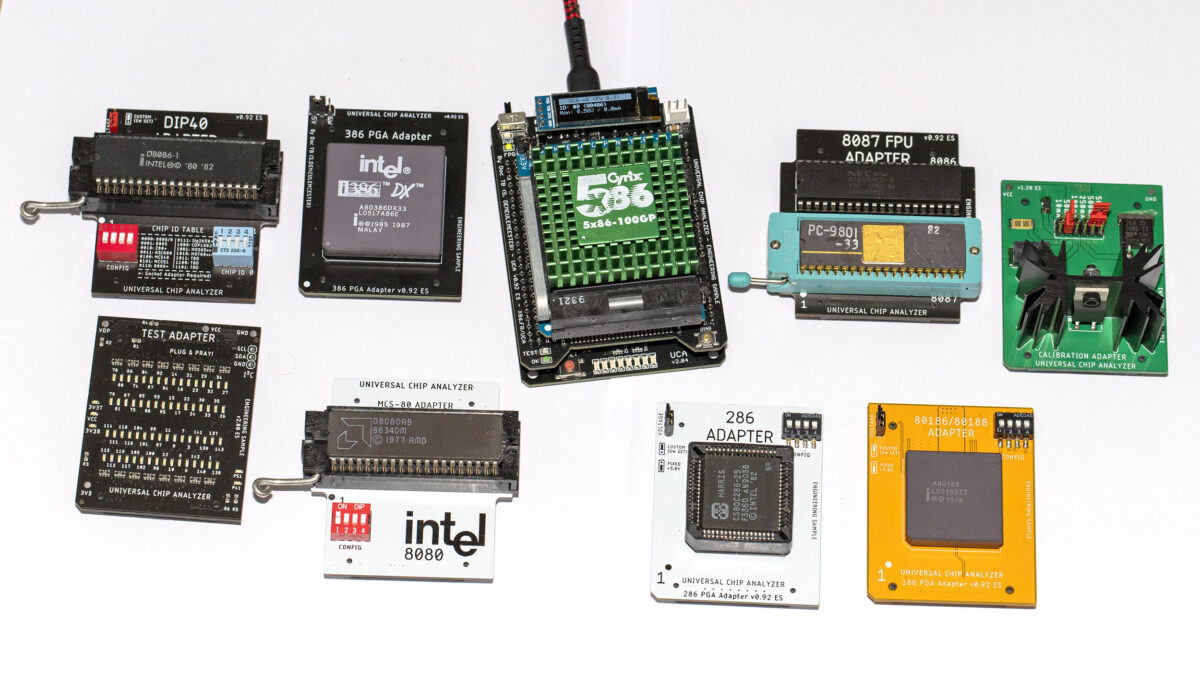 With the development of the PGA Shields (now able to support all Intel CPUs from 80186 to 80486) and the rise of demand from collectors, it was time to think about producing a batch of the Universal Chip Analyzer. In January, I finally decided to rebuild everything from scratch to get rid of old issues and restart from a “clean” foundation. The original Mojo v3 board I used since the very beginning was a fantastic tool, but after way too many patches, I encountered “hard” limitations which would have become major issues later. As I don’t want to rework the base FPGA board nor the main interface (IF) board for years to come, the solution was to build the perfect PCBs one time for all.

So, let me introduce the final Universal Chip Analyzer!

UCA FPGA Base Board

The Mojo V3 was a great tool, but it’s a 2013 Kickstarter product tailored as a development board.  I hesitated for a long time to replace the Xilinx Spartran-6 FPGA with a “new-gen” Spartran-7 or even an Artix-7. I finally decided to stay with the Spartran-6 for many reasons.

Switching to a Spartran-7 or Artix-7 would have just significantly increased the price and overall complexity without adding any feature. The only interesting point I will miss is related to the development toolchain. I could have finally got rid of the infamous Xilinx ISE for the new Xilinx Vivado Design Suite. But after all, I’m now quite comfortable with all the damn ISE’s bugs, so…

Here is the new Universal Chip Analyzer board next to the old one. 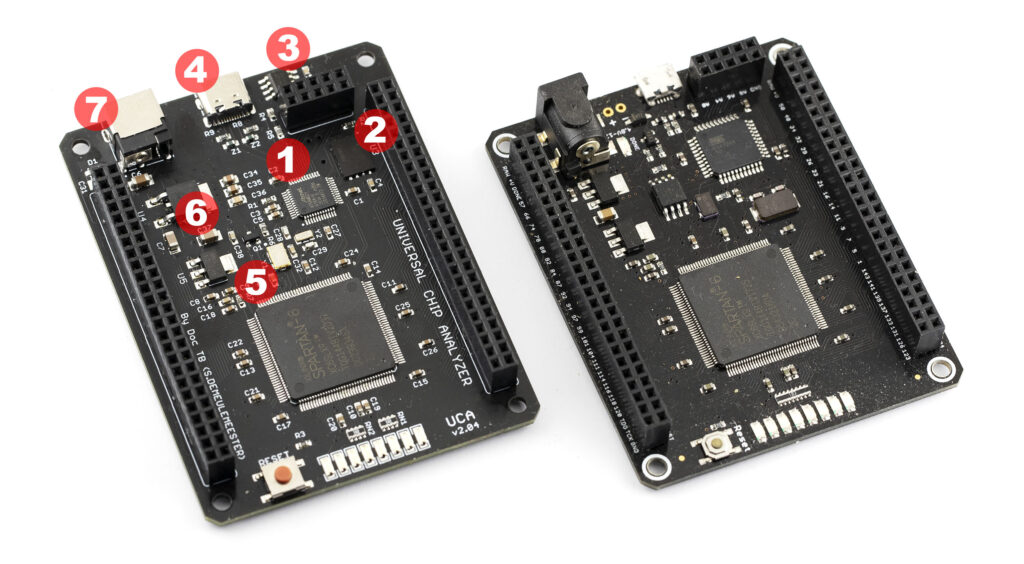 I kept the overall form factor, just a bit (6 mm) higher, but many components changed.

There are also many layout changes, allowing for example I2C communication from the MCU to IF to Adapter boards.

UCA Interface (IF) Board 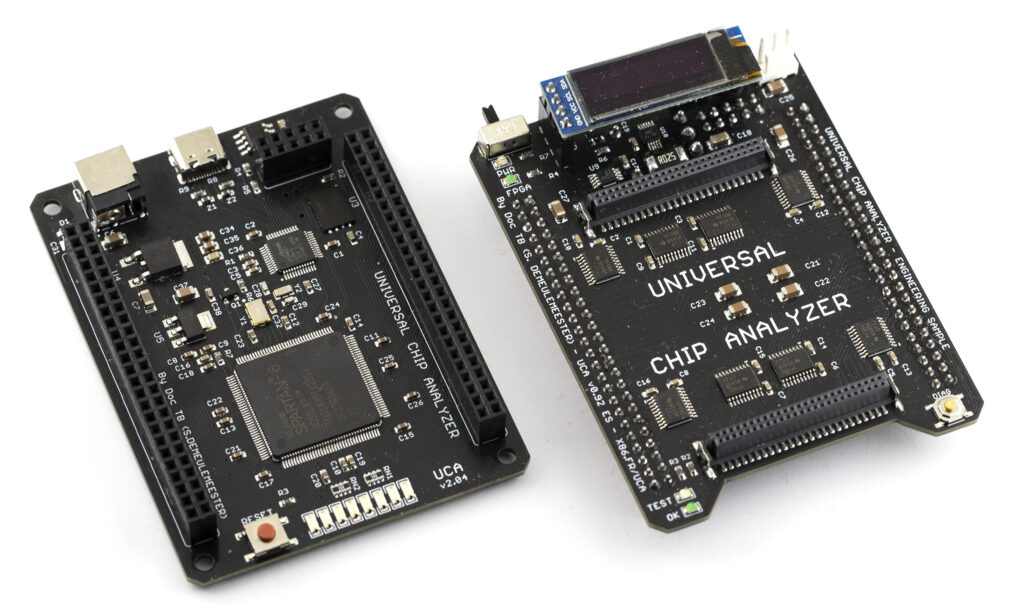 The final IF board has been upgraded to perfectly fit on top of the FPGA board. The PCB has been enhanced for reliability while lowering BOM cost. All but one tantalum capacitors have been replaced by MLCC (ceramic) caps. Layout has also been improved for better decoupling efficiency. Along the main voltage transceivers, the UCA IF board includes a 2A DC-DC voltage converter, precision voltage and current monitoring, and adjustable fast overcurrent protection. Voltage can be set by software (25 mV steps). A standard 3-pin fan header is available for high-power CPU like DX4s. 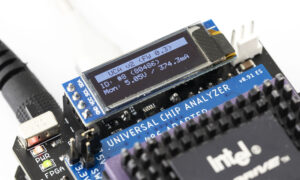 The slightly bigger PCB height allowed an optional 0.91″ 128×64 OLED display to fit on top of the board. It will be used later to display additional information about the test status. Right now, it shows the selected CPU Family and the voltage/current used.

The pinout on both 50-pin connectors located on the IF Board as slightly changed to accommodate previous modifications. I added some new signals to avoid future limitations. For example, the I2C is not passed from the ARM MCU to the adapter boards. Adapter’s ID also changed for their final values, so all currently designed adapters required a small layout change.

Let’s see the currently designed adapter and their current status. 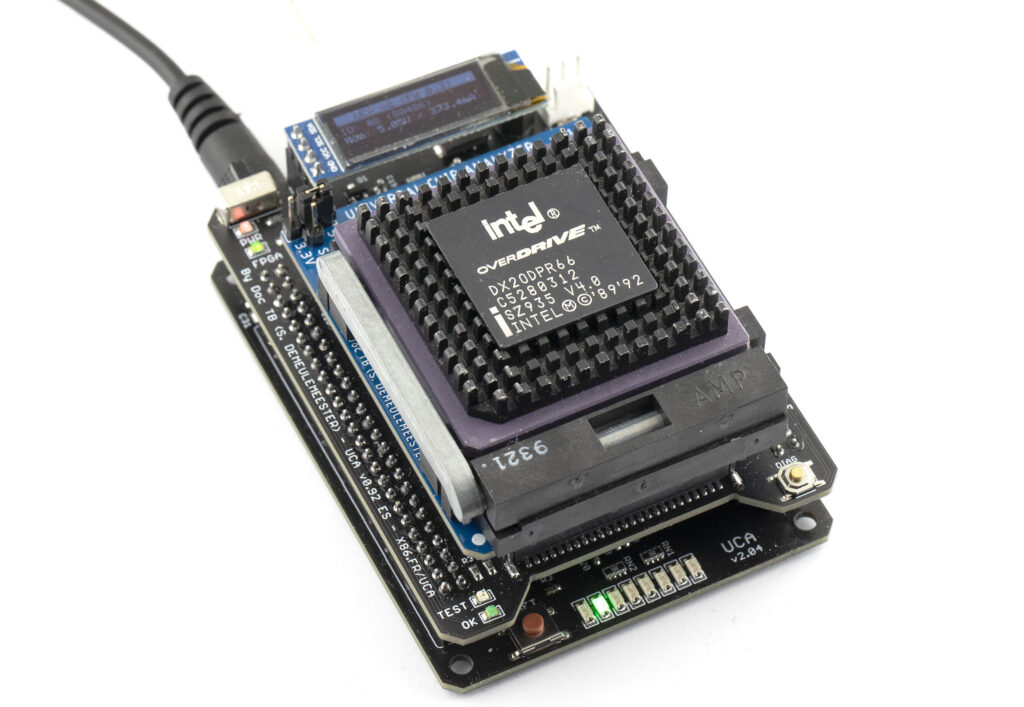 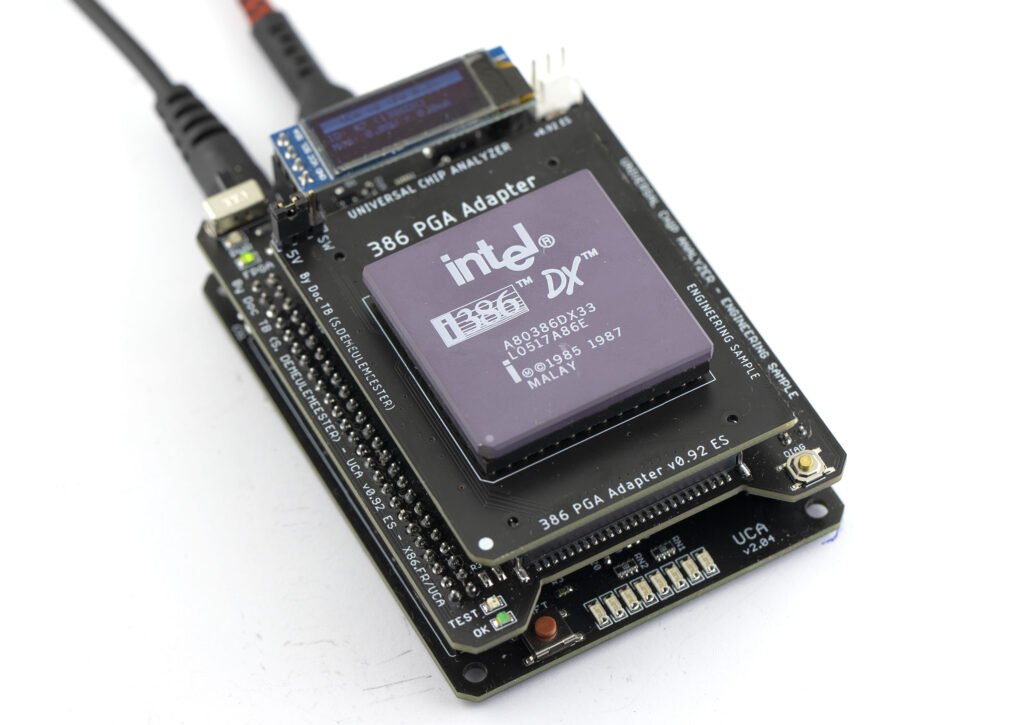 The 386 Adapter has been the most difficult one to build so far. While the hardware is now almost fine, it still need some work on the FPGA code to fine-tune some timings. 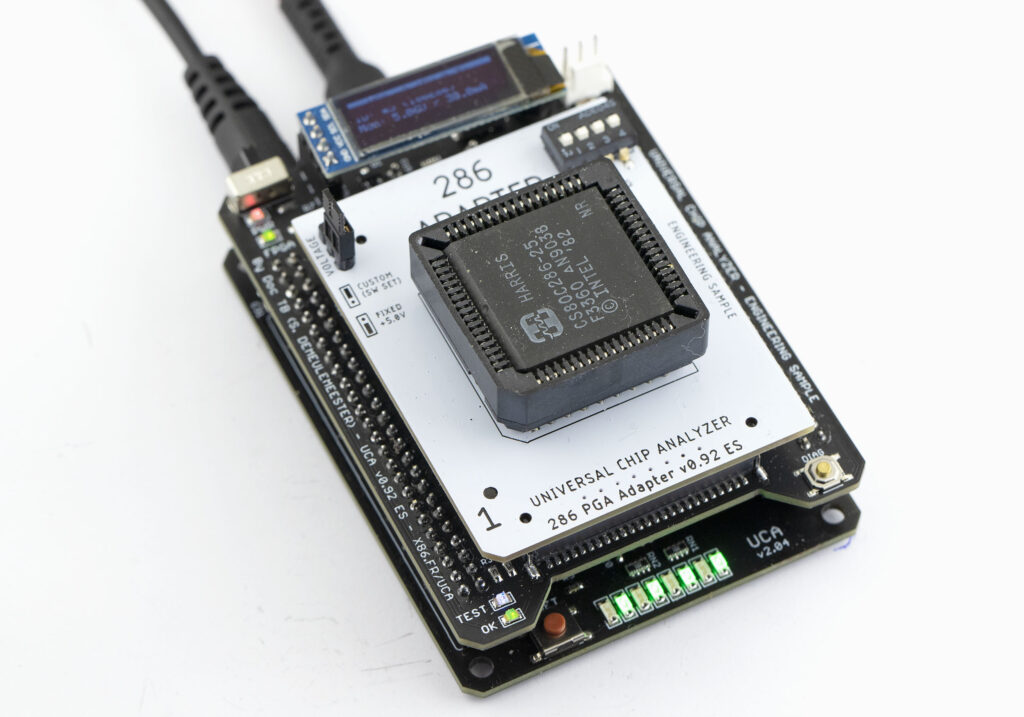 Almost finished and working as expected with all kind of 286s. The internal MCU code must be rewritten to accomate the new communication protocol, but it’s not a very complex task. 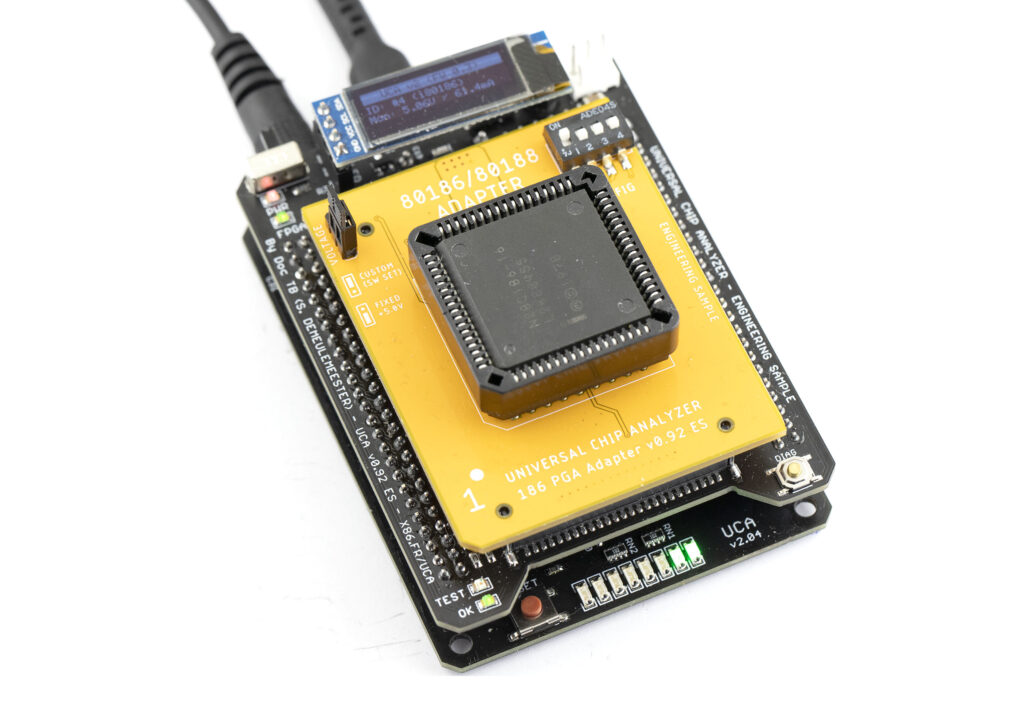 The 186 Adapter was the first adapter to be build directly for the new UCA “v2”. It was used to debug the new communication protocol between the different part of the UCA. Both Hardware and Software are now done. The only missing feature is the automatic detection of 186 vs 188 (currently, you have to select the correct bus type with the DIP Switch) 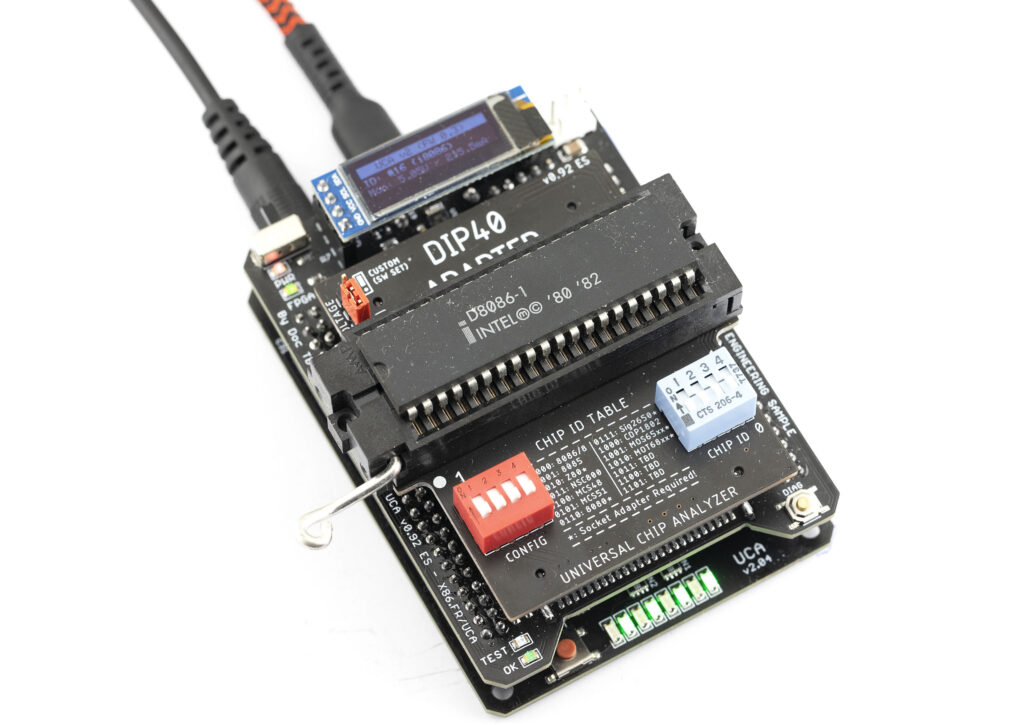 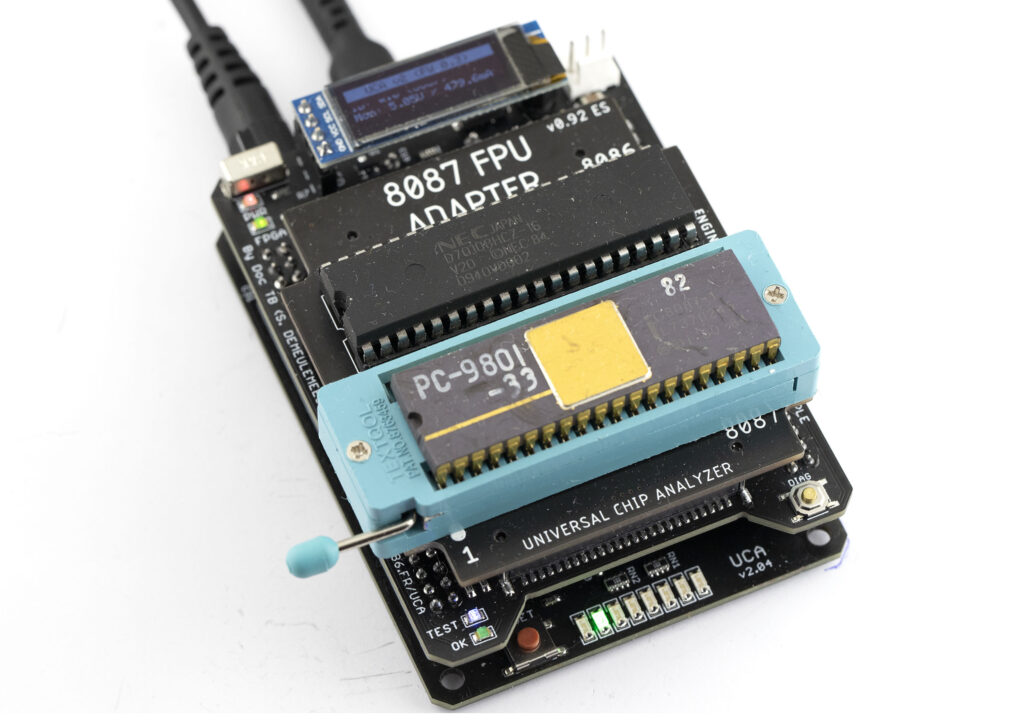 The 8087 Adapter has been quickly developed to show the UCA’s ability to also test FPUs. It requires a fixed 8086-compatible CPU that runs in MAX mode (while the DIP40 Adapter uses the MIN Mode). 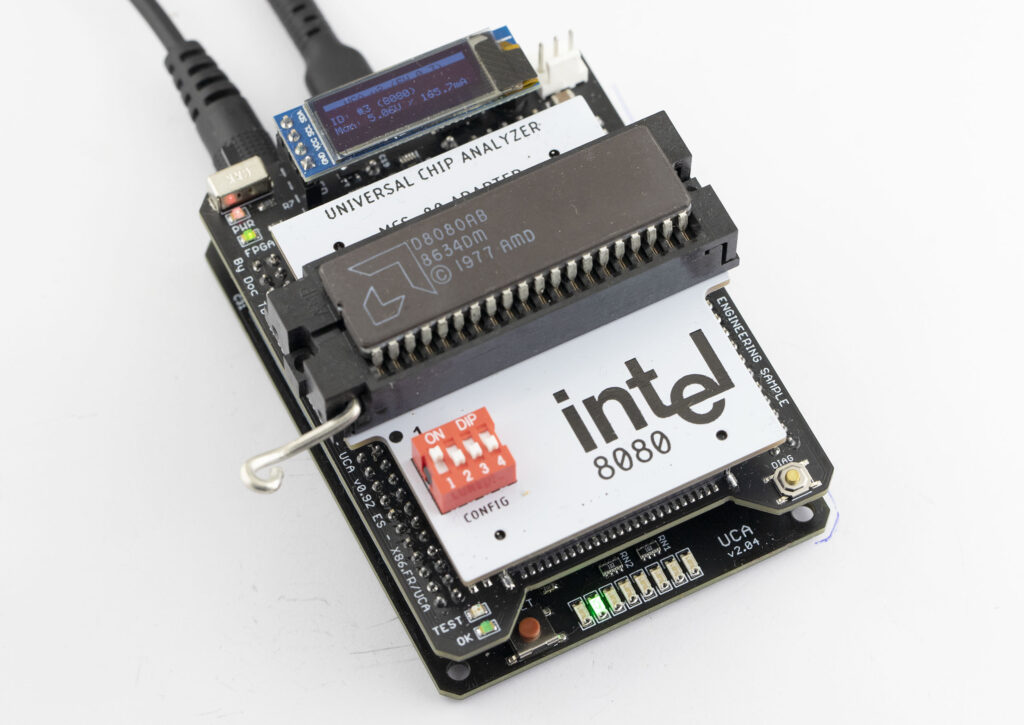 After discussion with fellow CPU collectors, I developed a standalone adapter for Intel 8080s. The price and feature of this one are the same than the Adapter that fit on top of the DIP40 Adapter :

At this time, I’m sure witch solution is the best. Maybe the standalone version is better to avoid mistake with DIP Switches… Leave a comment to give your thoughts!

These Adapters are just for internal use, but I wanted to share some pictures just for fun. 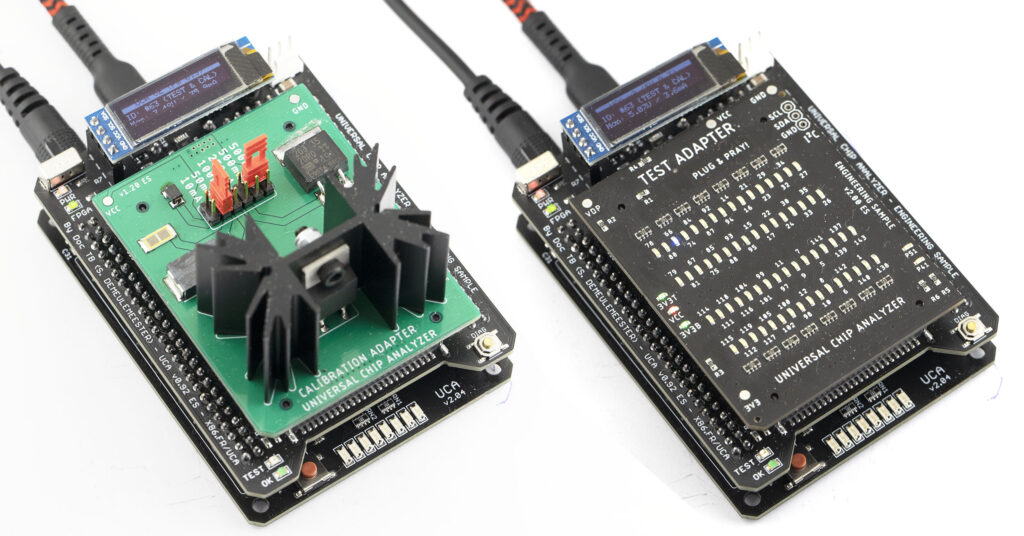 The left one is fitted with many precision power resistors and is needed to calibrate the power monitoring IC at various current load (10 mA, 50 mA, 100 mA, 250 mA and 2×500 mA). The right one is mainly used to test all signals of a newly-assembled FPGA/IF boards. It can detect shorts to VCC, open-circuits or adjacent-signal shorts. A backplate “Firmware Programmer” board with tiny pogo-pins has also been developed to flash the initial bootloader inside a blank UCA.