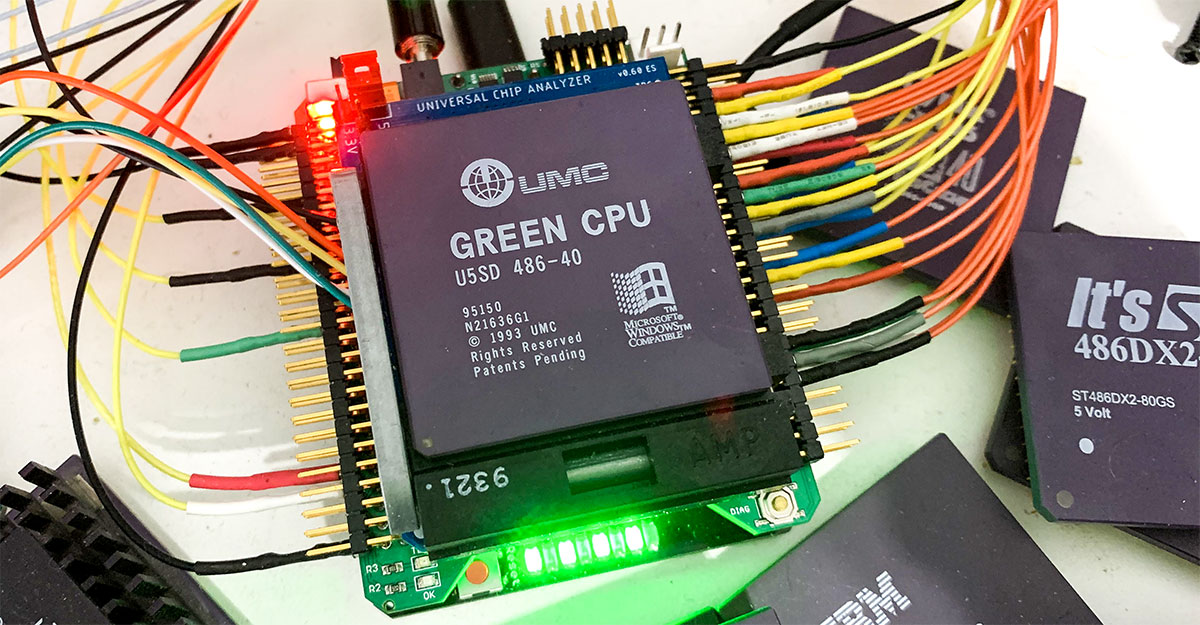 Last but not least, UMC’s 486s can now be tested on the Universal Chip Analyzer. All 486s ever manufactured are now supported! UMC is a Taiwanese semiconductor company still active today, albeit much smaller than its well-known competitors (TSMC, GlobalFoundries, …). In the mid-90s, UMC produced some rare 486s compatible CPU named “UMC Green CPU”. They were in-house design and not Intel-licensed like AMD 486s. Almost immediately after the initial announcement in 1993, Intel sued UMC and its distributors over patent infringements (including the infamous ‘338 patent, read more here). In response, UMC filled an anti-trust suit against Intel, but finally choose to give up and cease production of x86 compatible CPUs. Here are the retail UMC 486s I have:

The most common one was the U5SX (sometimes marked U5S) clocked at 25, 33 or 40 MHz and without FPU. Some UMC Green CPUs labeled “U5SD” were also released. Contrary to what you might think, they don’t include a FPU – verified with the UCA – but are just supposed to use the “DX pinout”. The meaning of this mention is unclear because both the i486SX and the i486DX shares the same layout for non-FPU related pins. Some guys have claimed that the difference is a relocation of the NMI pin, but I have not noticed that. UMC also released extremely rare U5D (with FPU) and U486DX2 (clock doubled with FPU), but only a couple samples are known today worldwide. 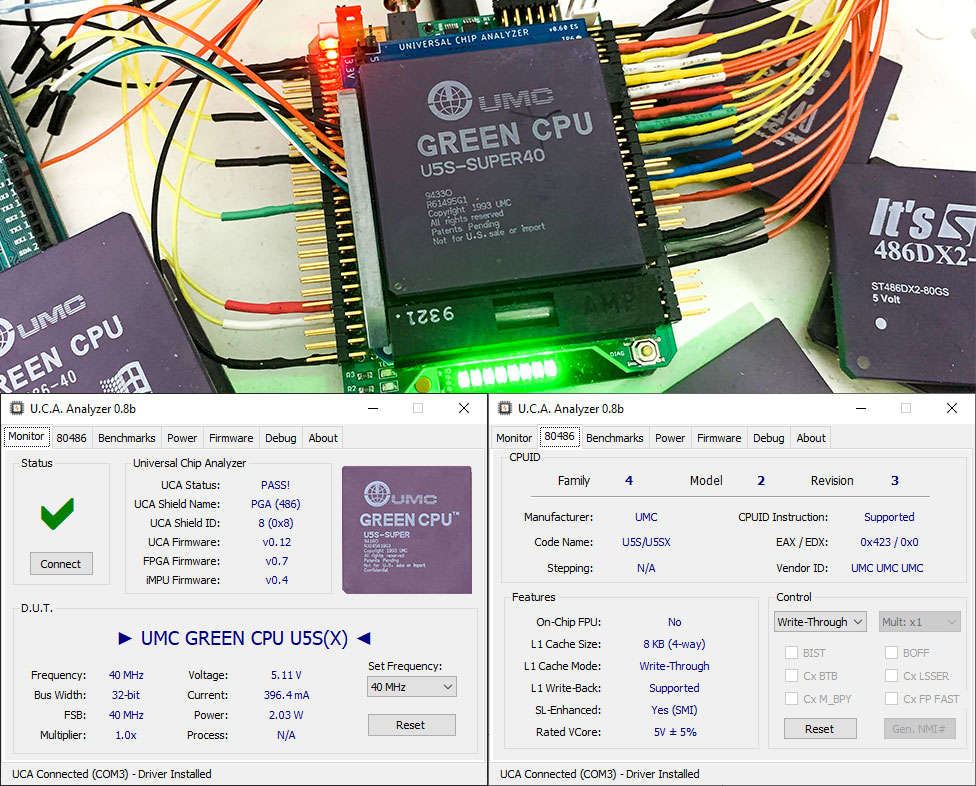 The Universal Chip Analyzer is able to test all UMC 486s, even if I still have an issue at 33 MHz and 40 MHz to grab every I/O. Code fetch works fine, but the output on I/O ports are sometimes dropped. It’s probably easy to solve, but I really need a copy of the UMC 486 manual / datasheet. Unfortunately, it seems nobody has one in the CPU collector’s community. If you can help, you’re more than welcome!

Looking at threads about the UMC 486 on cpu-world, vogons and vcfed, I saw that some people were wondering if the CPU marked “SUPER” were different from the “non-SUPER” ones. So, I ran some INT benchmark with the UCA. 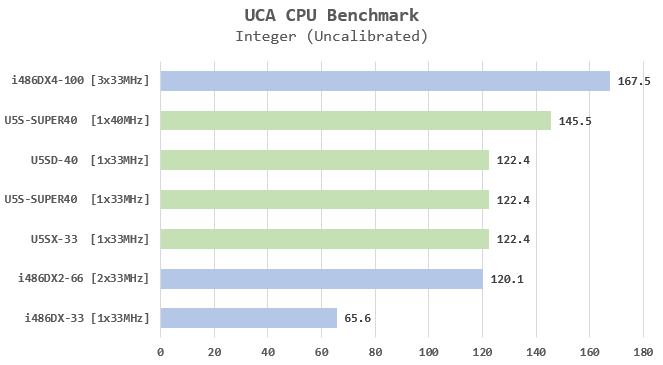 As you can see, all UMC CPUs (U5S-SUPER, U5SX and U5SD) offer the exact same results when clocked at the same frequency. You also probably noticed the awesome relative performance of the UMC 486 versus the Intel 486s. Clocked at 33 MHz, the UMC 486 is as fast as an Intel 486DX2-66 and, when clocked at 40 MHz, it’s almost as fast as an Intel DX4-75. That’s not a bug. The UCA doesn’t have any wait-state on memory subsystem and actually uses a mix of heavy Integer divide and multiplication instructions for the benchmark. This result comes from the ultra-fast ALU designed by UMC, especially on divides. While Intel 486s requires 40 cycles to perform a INT divide, UMC 486s only need 7 cycles. That’s more than 5 times faster! However, in real-world applications, the UMC 486-SUPER at 40 MHz was on par with an Intel i486SX2-66. Still excellent!